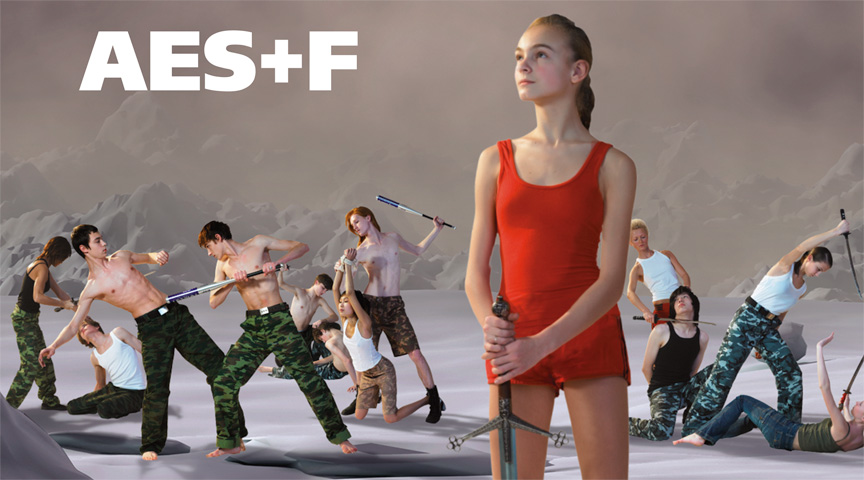 The AES group was founded in 1987. In 1995 the artists started their collaboration with photographer Vladimir Fridkes and created a new group, called AES+F 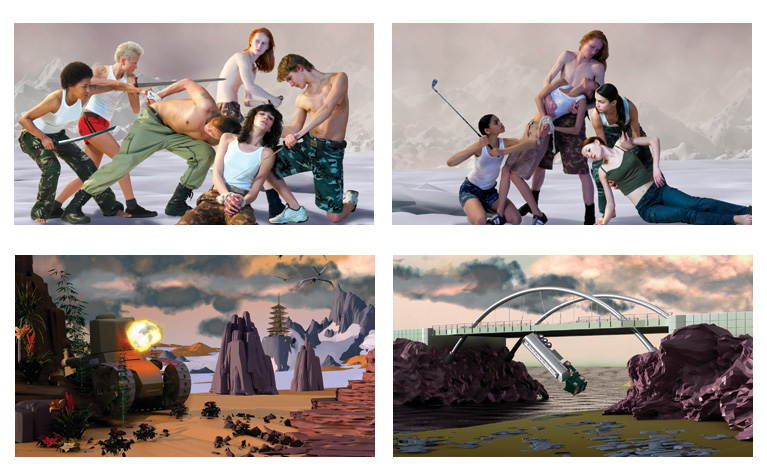 SVYATSKY, EVGENY
Was born in 1957 in Moscow, graduated from Moscow University of Printing Arts (department of the book graphic arts) in 1980. Lives and works in Moscow and New York.
Was occupied with book and advertising design, poster and graphic art. Participated in international poster competitions, exhibitions of book illustration and design, graphic art. Worked as Creative and the Art Director in several publishing houses in Moscow.

FRIDKES, VLADIMIR
Was born in Moscow in 1956, lives and works in Moscow.
Works as a photographer of fashion. Published in magazines: VOGUE, Harper’s Bazaar, ELLE, Marie Claire, Cosmopolitan, Sunday Times Style and others. Collaborates with AES group since 1995.

Today they can be regarded among the most outstanding modern Russian artists, whose video-project “Last Riot” was shown at the Russian Pavilion in the course of the 52nd Venice Biennale of Contemporary Art. In 2007 AES+F participated in the Istanbul Biennale and their retrospective show is taking place at the Russian Museum in St. Petersburg.

The exhibition of the AES+F group consists of a number of projects which were created by the artists during the last decade (1997–2007) and are dedicated to the theme of childhood and adolescence in modern society and contemporary culture. Children are always perceived as the focus of human hope; each civilization creates its own mythology of childhood, but at the same time children and teenagers represent an enlarged mirror of society itself.

The AES+F group is not afraid to face directly some of the important philosophical, existential and social issues, to overtly articulate their aesthetic concepts, which have a markedly prophetic character. Each one of its projects, be it “Suspects” (1997) or “Action Half Life” (2003) is quite provocative, putting into doubt our conventional ideas about good and evil, sin and innocence, virtue and vice.

The series “Suspects” is a gallery of 14 portraits of young girls that have not yet reached 18. Seven of them were made inside a high security prison for juvenile delinquents and show convicts who were sentenced for unmotivated brutal killings. The other seven photos depict school-girls from Moscow, belonging to relatively well-off families. The installation “Suspects” shows the images from both groups mixed in a haphazard fashion. For ethical reasons the true information about each of the participants of this project is confidential and is known only to the artists themselves. The audience, however, may attempt to answer the question – which of the sitters was capable of committing a serious crime?

The name of the project “Action Half Life” brings to mind a popular computer game, released in millions of copies on all continents. The personages here are the same teenager-models selected among 500 candidates. (It is worth noting that in contemporary Russia model agencies are regarded as a very prestigious form of education, capable of forming the proper social identity of a child, and they are very successful in competing with the traditionally popular Soviet-time ballet, art and musical schools, as well as with sportive and natural-science institutions). The backdrop here is the Sinai Desert, which reminds one of some “Star Wars” scenery. Like Adam and Eve in the Garden of Eden, the personages are represented in a state of being tempted, when terrible weapons of destruction are being handed over to them, while they are still ignorant of the existence of heaven and hell. This is why their eyes are usually looking in one direction, while their arms are pointed in another, – the “action” has not yet begun. Enticing kids into the world of computer games, the principle object of which is to destroy everything and everyone, we can only try to imagine the consequences.

The project “Last Riot” is another step in analyzing the phenomenon of the virtual word, the rapid expansion of which creates new illusions and eschatological prophecies. If “Action Half Life” represented arms in the hands of children, which were not yet in use, here the “action” itself begins. 3D animation, creating a sense of cyber-space, brought to life by the real and the media worlds of the 20th century, brings the viewer into a fantasy-landscape of a new paradise where time seems to stop running. Epochs of the past exist simultaneously with the future, and creation walks hand in hand with disintegration. The artists fill the landscape with glamorous androgynous teenagers, who start a riot-war against themselves. In this battle there is no difference between the victim and the violator, between the male and the female, between having an objective and acting without any meaning. The participants of the Last Riot live through the myths of all times and nations, mixed with the myths of contemporary mass culture, cliches and conventionalities of computer animation. Their somnambulistic dance-battle reminds one of the aesthetic of Caravaggio. Like the Flying Dutchman, doomed to eternal wandering, the heroes of the cyber-epic are destined to fight forever. This is a battle without blood and pain, a contact without a contact.

Each generation creates its own version of the apocalypse in music, painting and other art. The “Last Riot” is a post-apocalyptic vision, which comes to replace them.

Analyzing the contemporary world, turning to its mythology and to innovative techniques, the artists combine fashion-photography, advertising-media, popular mass and youth culture, Hollywood films and the classical aesthetic of old masters in order to create their own visual language, emphasizing the acute problems of 21st-century civilization, a universe of globalization where the virtual world is gradually overcoming the real one.