It isn’t easy to write when you speak with your eyes, much less when you learn to see with the heart. It isn’t easy to present this photographic exhibition about the drama of the war and the forced displacement in Colombia, especially when the face that you see there is perhaps our own face, but unrecognized, unknown and distant. Also, because we don’t want to lift our gaze up to that broken mirror that reflects back to us a bit of guilt, where the face is that of our children and that of the humble men and women who have been endlessly humiliated, whose riches and tragedy has been to live in the countryside and in oblivion. 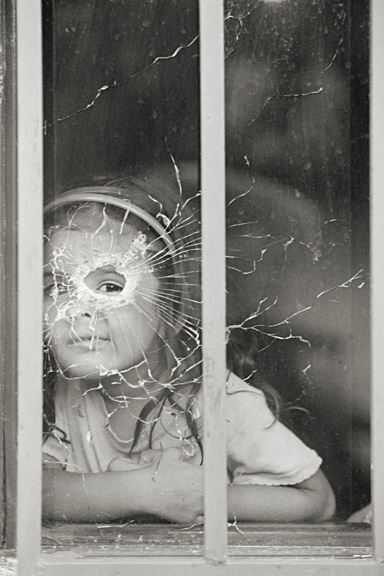 Meanwhile, this war against civilians doesn’t end.  Like a monster with a thousand heads it continues rapidly to devour the skin of the youth, to whom, on opposite sides, they give money and scraps for going forth to destroy the ideas and dreams of peasants and citizens who yearn for a country with opportunities and social justice.  The guns survive, and, as always, the financiers, the instigators of the war, of the pain and backwardness.  The corrupt also survive, those interested in mega-projects and laundering narco-trafficers’ money, washing it with the dirt of the lands of the dispossessed.  They, those war lords, have become the masters and owners of the earth.

The victims wander about marked by the label of the displaced and the exiled; the excluded and the refugees.  They are trivialized in reports and statistics from different governments that minimize the numbers and dispute them with the Non Governmental Organizations in articles and sound bites in the mainstream media.

Men and women from mestizo communities, blacks, and indigenous people from all over the country, are not anonymous beings.  They have a face and a name and are part of a nation where armed men and women and government officials take oaths with flags and crosses to defend.  They still hope, still long for, still desire, this war to end.  They want that monster called violence not to continue grabbing their lands, their lives and dignity.  They want to live in tranquility.  They have been tired and victims for years, for centuries.