The photograph must be silent … this is not a question of discretion, but of music.

No one can explain with certainty what takes place at Alto de las Cruces, located in a rural area on the outskirts of Bogotá. Actually this does not matter. What does matter is that there are occurrences that do not wish to whither away, and that are commemorated through an anonymous gesture. The conformation of a cross – one of the oldest symbols of humanity – is a simple gesture, meaningful and of easy interpretation.

In recent years, the photographic oeuvre of Juan Fernando Herrán has been characterized by revelations of certain situations that would have otherwise remained hidden and unattainable. There is a common strategy with his findings of poppies, military airplanes, or crosses that involve walking towards places of difficult access. This, which at first sight seems circumstantial, functions as a preparation, almost as a meditation, that allows the artist to get closer to the encounter with a real dimension of the space he photographs. In this case, what he encounters is the result of a silent and collective manifestation, located in the middle of nowhere. It is a hill literally planted with crosses.

The proliferation of the form, and the primitive aspect of its facture, makes Herrán’s images lead to an inquiry about how the encounter between horizontal and vertical lines work within our imageries. As if it were an innate knowledge, it is understood there that it symbolizes the meeting of the mundane and the spiritual, life and death and in this case, it is even possible to think about it from the confrontation of nature and rational order. In this place, the cross appears both as a primitive and as a sculptural gesture.

In a context like ours, where the public character of actions is increasingly more important, these photographs pose questions about the survival, meditation, and celebration of the ritual. Approaching these images it is impossible not to ask about the nature of this place, which, despite its religious connotation, is neither a temple nor an altar. In the manuscripts for Ulises, James Joyce wrote: “places remember events.” It may be that this place is in its essence the event that it remembers. Alto de las Cruces is in this sense a territory for memory.

In Colombia there is a very strong contextual charge for this type of image. It is obvious that this is always present in Herrán’s mind. However, his training in sculpture allows him to notice the form and facture of these crosses as important components of the image. They are, mostly, made out of natural material found in the site: flowers, branches and even stones, are part of this Holy Field. The resulting forms, even though precarious, have the capacity to move affections, even more when we are speaking of high moor vegetation, they are familiar to us and therefore we feel them painfully closer. The knots – which Herrán perceives as an aesthetic event and that in some cases remind us of colonial monstrances – are fabricated with straw, plants, flowers, plastic bags, rope and synthetic fiber. They are made in such a precarious way that they transmit the intensity of the moment, inspiring a feeling of fragility and seclusion.

Despite the magnitude of the spectacle, it is possible to intuit from the way the photographs are taken that this place has been formed by an intimate gesture. It is not a monument such as a cemetery, but a signaling of the site, a private gesture from which a place charged with collective feelings is constructed. Generally the decision of what should be publicly remembered is made by superior instances: at Alto de las Cruces we suspect a silent consensus. Many of the crosses are hidden, camouflaged with the rest of the vegetation. They can even go unnoticed, mistaken for branches. Once the eye gets use to the natural scenery, the forms of the crosses seem to jump out, imposing their presence. The observer is surprised when he or she discovers in the image much of his or her religious imagery, which, though it isn’t explicit, invites interpretations in consonance with the cultural.

For Herrán, the challenge after the encounter, is giving dimension to this space, not betraying it when showing it, not falling back into the traditional disposition of the intimate as spectacle. To transmit the vital experience of the encounter becomes a requirement. It is necessary to answer the sensation of being in a sacred place that exists not because of a decree but due to a consensus.

Just as in his early works – Papaver Somniferum and Fields of Vision – the objects photographed appear in front of us charged with ominous beauty. In every single type of image, they speak of painful events and processes which are shown with serenity and precision, without ceasing to be disquieting.

It is impossible to confront these images and not wonder what leads the artist to bring this space, hidden in-between the mountains, to the spotlight. Why defy the private character of it? One understands, however, that this is the only way possible to perform an act of preservation of something that increasingly disappears every day, not only because the crosses are returning to nature from where they came, but also because of the imminent oblivion of the event that they commemorate. In this sense it seems that, by bringing these images to us, Herrán is placing another cross, repeating the act of not letting it stay in oblivion. 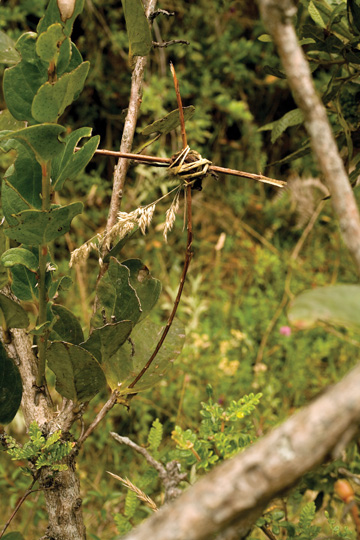 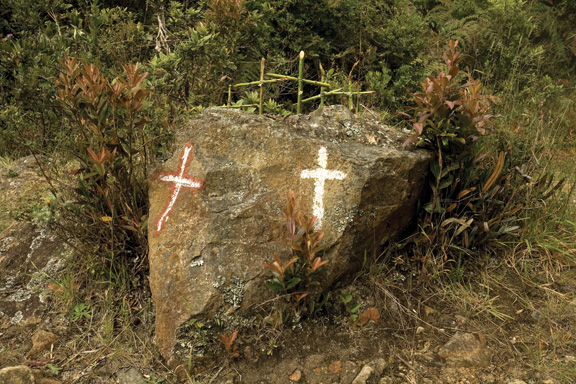 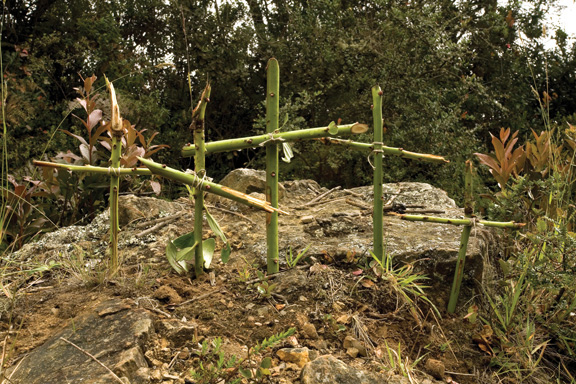