Art chose me: I’m an American Indian, and Indians make stuff. My father carved. My mother painted. When I was five, I’d go up and down the street trying to sell my small paintings. By high school, I was a full-scale artist selling my pieces at the shopping malls. I want to represent our current political situation in my art using very timeless qualities. To do so I take the approach that Lewis Carroll did in Alice in Wonderland or L. Frank Baum did in The Wonderful Wizard of OZ—to use images, icons, and cultural symbolic references as a way to veil a political message. However, in the end I want the images and the content to be left open to interpretation.

Kraft introduced Mr. Peanut into the hearts and diets of America in 1916. The Mr. Peanut image was selected from a Planter’s Peanut competition entry; however, the “branding” of this icon was not complete until a commercial artist working for Kraft added the final key elements —a top hat, monocle, cane, and gloves—all of which are emblematic of “big business.” Long-standing symbols and images in popular iconography, defining much of US culture and catalyzing the degeneration of high culture, are utilized by the private sector for indoctrinating the public.

The European destruction of the indigenous culture is represented in US history as little more than a footnote. The Native American stereotype image of “the chief” is utilized in selling a variety of tobacco, alcohol, kitsch, and novelty products and in doing so severs the connection between our contemporary US identity and the legacy of original American culture. Fox uses George Washington’s image to further invoke our country’s history and colonial past. George Washington was a leader who stepped down after two terms and refused the title of being the American monarch. He strived to set a precedent for his successors to follow, one that kept the government’s focus on domestic issues rather than on foreign affairs.

The depiction of Mr. Peanut’s, John F. Kennedy’s, and George Washington’s image, as well as sterotypical Native American iconography, within the space or the “peanut gallery,” Clark Fox creates a convergence of ideas that open up a dialogue with the viewer in order to examine the legacy of our American culture, popular culture, democracy vs. plutocracy, and the role of leaders and icons. 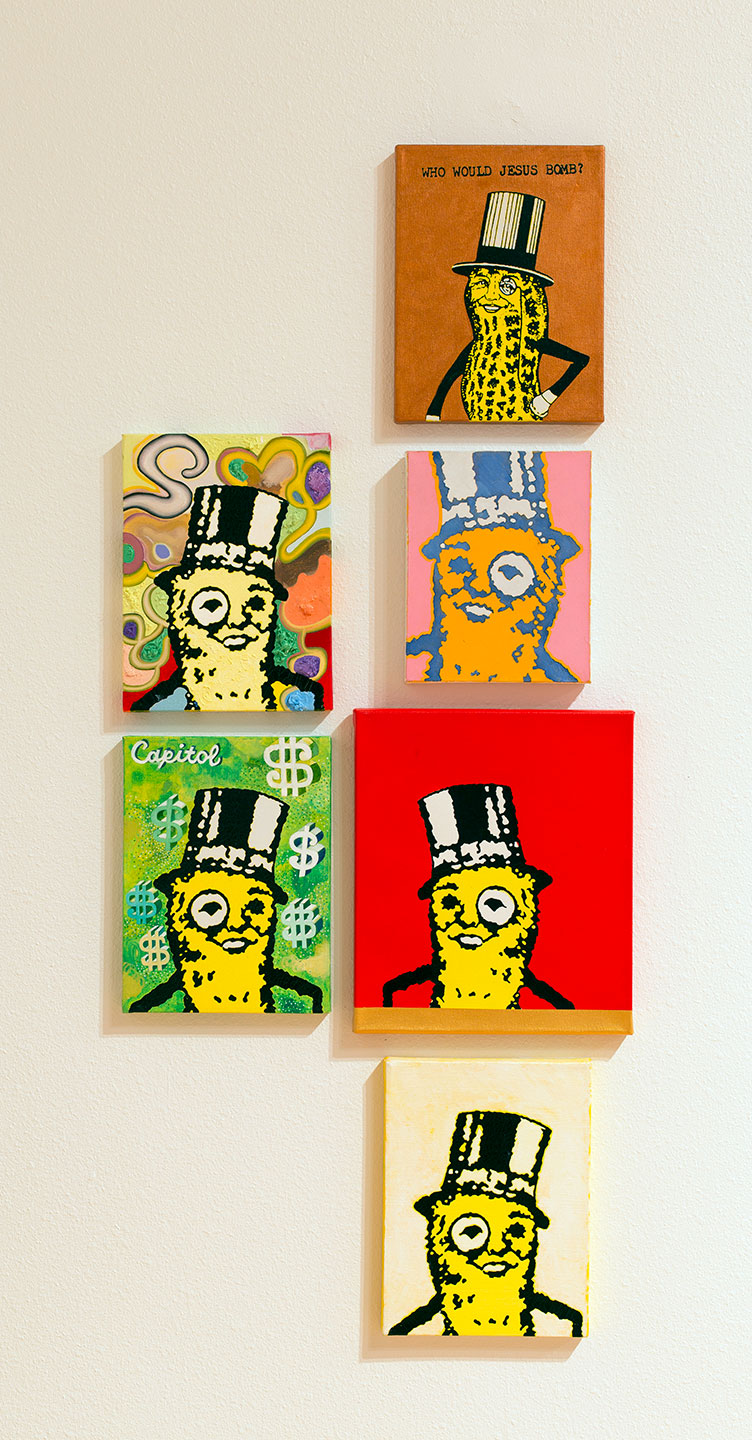 Biography
Clark V. Fox (1946–, born Michael V. Clark) started making art full time in Houston, Texas, at age five and hasn’t slowed down since. Fox studied with Japanese art master Unichi Hiratsuka (1895–1997) at the Japan–American Society of Washington DC, 1964–1965. He studied fine art and took a figure drawing class with the painter Lennart Anderson (American, 1928–) at the Pratt Institute in Brooklyn, 1965–1966, and painted on projects with the color field painters Gene Davis (American, 1920–1985) and Thomas Downing (American, 1928–1985). Clark V. Fox, The Godfather of Modern Underground Art, received his Bachelors of Fine Arts (BFA) from the Corcoran College of Art and Design, where he studied from 1966 to 1968. He subsequently taught there from 1968 to 1970. He has fifty-three works in the permanent collection of The National Gallery in Washington DC. In 1992, he founded the Museum of Contemporary Art in Washington DC and was its director until 2006. Fox moved to New York City in 1970 and currently lives and works there as well as in Los Angeles.