I make revolutionary art to propel history forward. This is a world where a tiny handful of people controls the great wealth and knowledge humanity as a whole has created. It is a world of profound polarization, exploitation and suffering and billions are excluded from intellectual development and full participation in society. It does not have to be this way and my art is part of forging a radically different world. The work illuminates the misery that this society creates for so many people and it often encourages the viewer to envision how the world could be. 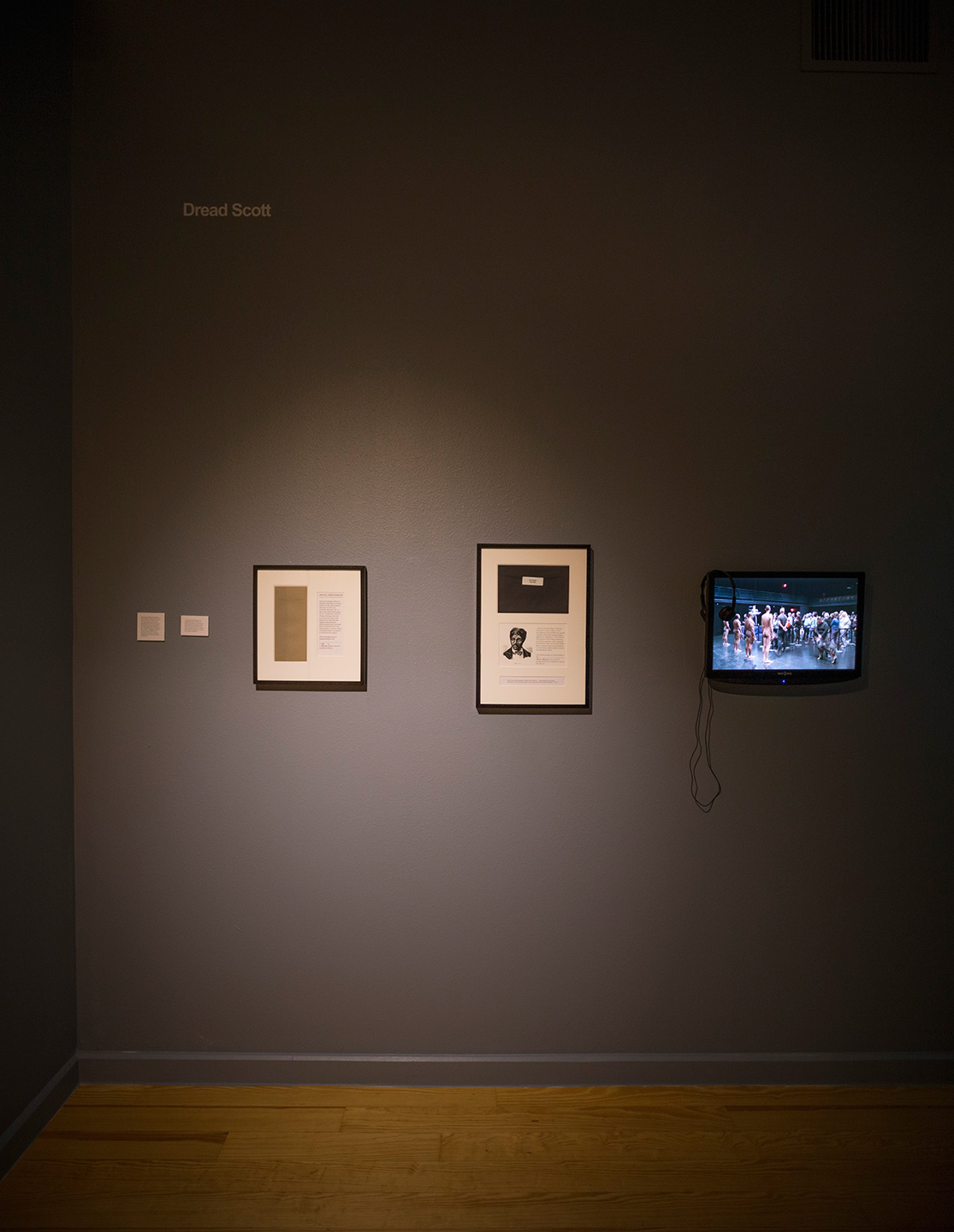 Dread Scott: Decision is a performance that reflects on a country whose democracy is rooted in slavery. These roots are woven into the fabric of the country including in its founding documents. The performance featured three main elements:

Scott read from the text of the 1857 Supreme Court Dred Scott decision, which ruled that slaves were property and were “so far inferior, that they had no rights which the white man was bound to respect.”

A group of four nude black men were guarded and controlled by two German shepherd dogs and their handlers. The dogs barked loudly and frequently at the group of men throughout the performance which made it difficult to hear the reading.

The audience was also part of the performance. They were corralled into a line and asked to go one at a time into a “voting booth” to one at a time and respond to questions within the booth. To get to the booth they had to pass through the line of black men. These three elements occurred simultaneously.

The nude black men stood in a line and changed positions occasionally throughout the performance. There was no separation between the dogs with their handlers and the prisoners that they “guarded.” Likewise, the audience was not separated from the men or the dogs, though they were not to be allowed near the dogs. The men looked at the audience throughout the performance.

In the voting booth, the vote would not stop the control and harassment of the black men in the performance. The questionnaire in the booth posed moral questions to each audience member individually. Would they have voted in a segregated election? Would they vote in the upcoming US presidential election if their vote implied acceptance of continuing the legacy of slavery within US society?

Dread Scott: Decision was part of Brooklyn Bred, a set of performances at the Brooklyn Art Museum-Fisher, curated by Martha Wilson. It was premiered as part of BAM’s 30th Anniversary Next Wave Festival.

The text of the Dred Scott decision is a lengthy argument for white supremacy. Its arguments are rooted in the US Constitution and the Declaration of Independence, as well as US laws and customs. It is well worth reading. 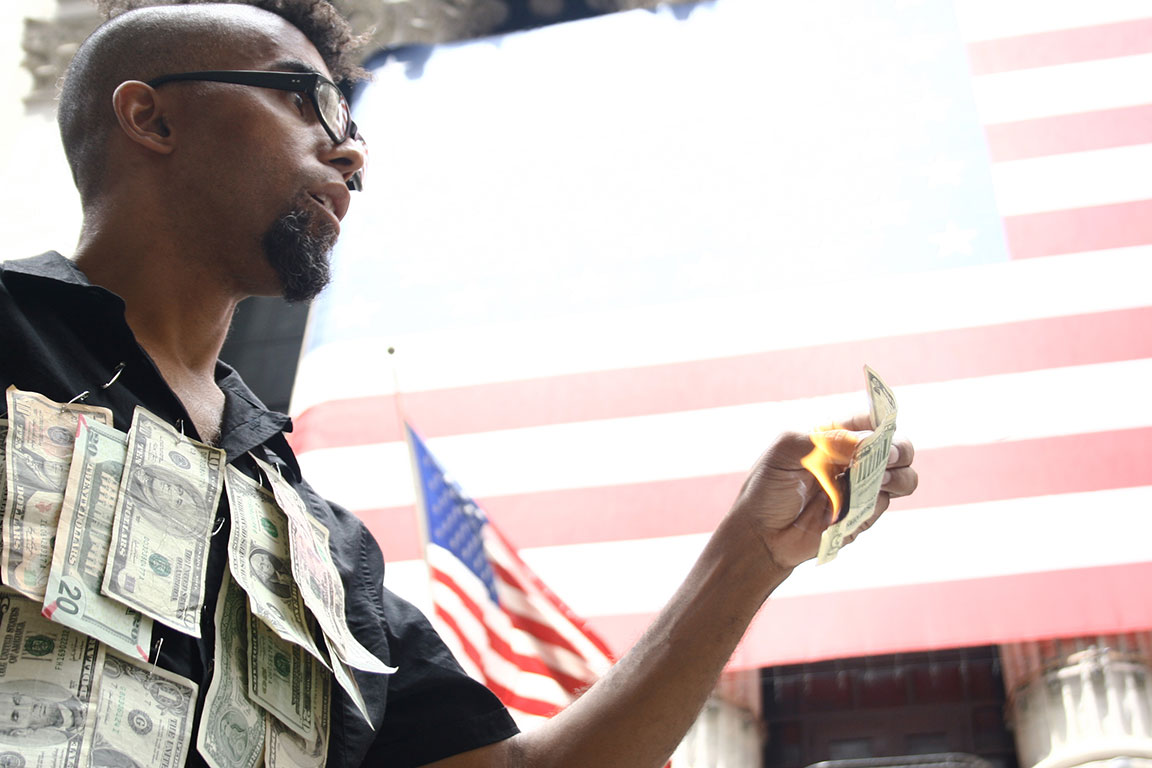 Money to Burn is a performance that was enacted on Wall Street. Starting with $250, Dread Scott burned money—singles, fives, tens, and twenties, one bill at a time, while encouraging traders and others on The Street to join in with their own money. Referencing street “peddlers” of bygone days, Scott repeatedly sang the words “money to burn.”

Money to Burn explored a taboo subject, but at the same time this performance only made physical what happens on stock markets around the globe every day. In a transgressive act of burning my own money, some of which was generously provided by a grant from the Franklin Furnace Fund, the performance alluded to the absurdity of a system based on profit.

It’s crazy to burn money on the street but it is the height of rationality to have a market where billions of dollars can vanish in an instant and where even houses and food can evaporate. Unlike the “irrational exuberance” behind closed doors of trading firms, Money to Burn took place in public for all to see. It was the ultimate act of destruction of value—this money was not exchanged for anything.

This unsettling immolation highlighted the polarization of wealth and income that exists in the world. The audience of brokers and tourists alike had the option of joining the act. Some recoiled at something that goes against principles that we have learned from our earliest age, others chose to add to the pyre. Police intervened after twenty-five minutes and stopped the performance fifteen minutes later. 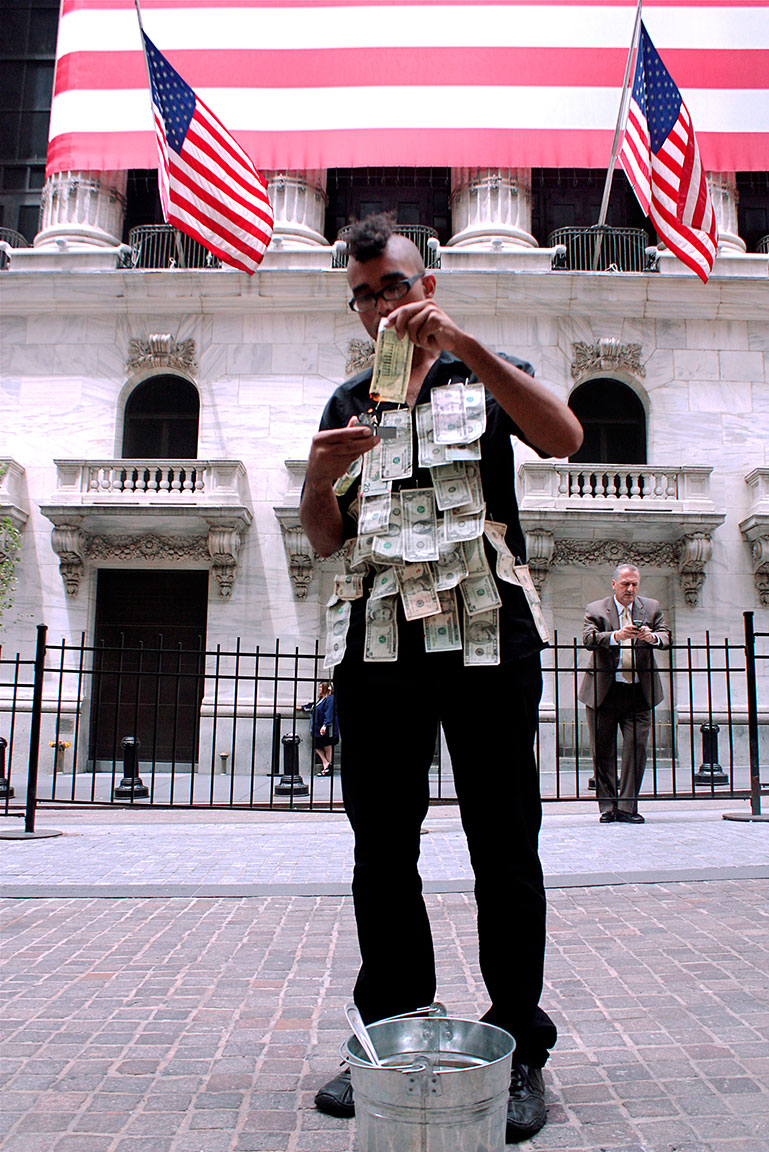 Biography
Dread Scott makes revolutionary art to propel history forward. He first received national attention in 1989 when his art incited national debate over its use of the American flag. President George H.W. Bush declared his artwork What is the Proper Way to Display a U.S. Flag? “disgraceful,” and the entire US Senate denounced this work when they passed legislation to “protect the flag” (Flag Protection Act of 1989). To oppose this law and other efforts which would effectively make patriotism compulsory, Scott, along with three other protesters, burned flags on the steps of the Capitol building in Washington, DC. Ultimately the issue resulted in a Supreme Court case (United States v. Eichman 1990), which invalidated the federal law against flag desecration as a violation of free speech under the First Amendment to the Constitution.

Scott has been the recipient of numerous grants, fellowships and extensive news coverage from television to print. He has exhibited and performed across the globe and some of his works are in the collection of the Whitney Museum of American Art (NY), the New Museum of Contemporary Art (NY) and the Akron Art Museum (OH). His work has been integrated into academic curricula, and What is the Proper Way… is discussed in many art history classes and featured in Henry Sayre’s textbook A World of Art.

Scott works in a range of media including performance, photography, screen printing, video, installation and painting. His works can be hard-edged and poignant. The breadth of media he explores is unified by the themes he addresses and how he handles them. His art illuminates the misery that society creates for so many and encourages the viewer to envision how the world could be.