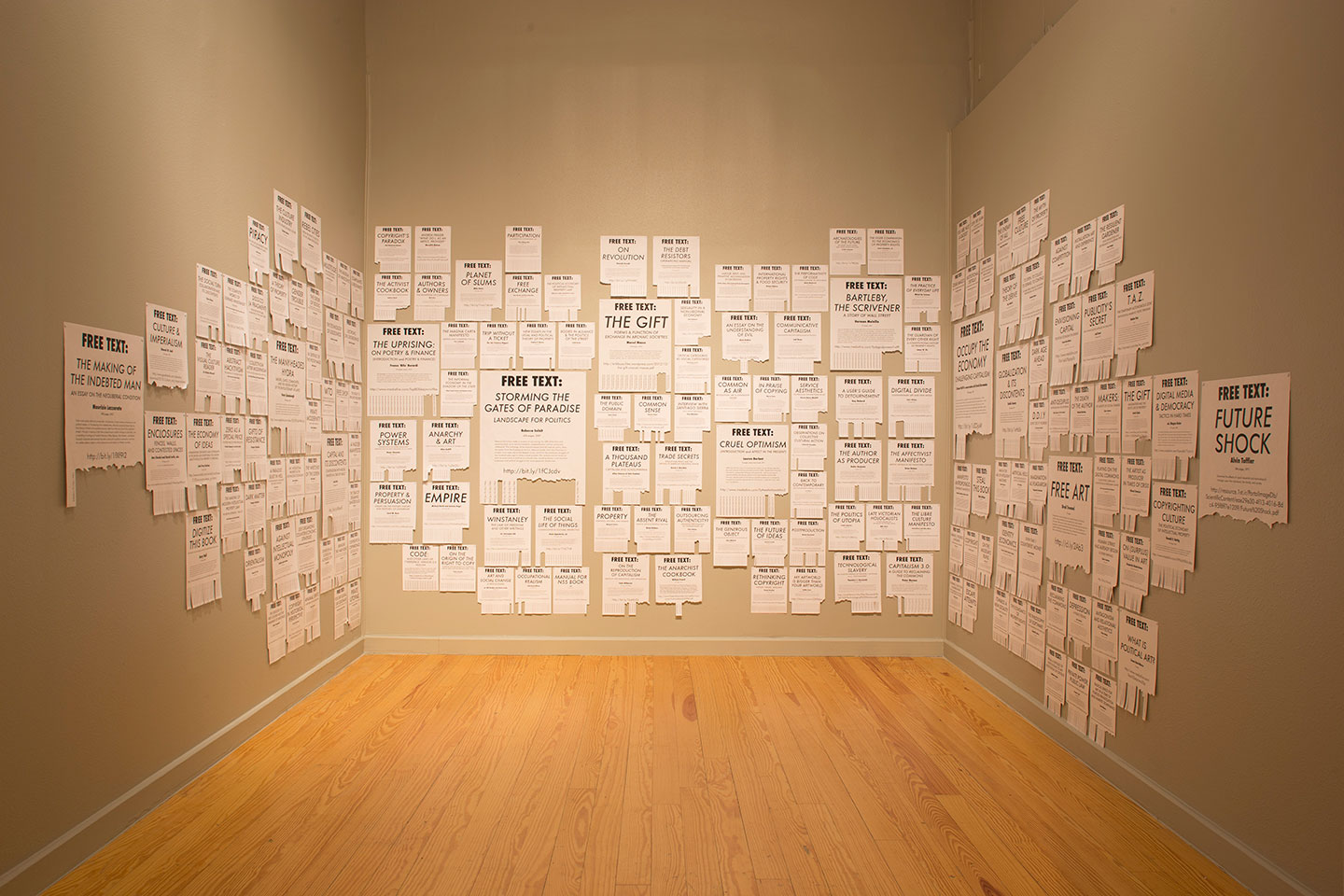 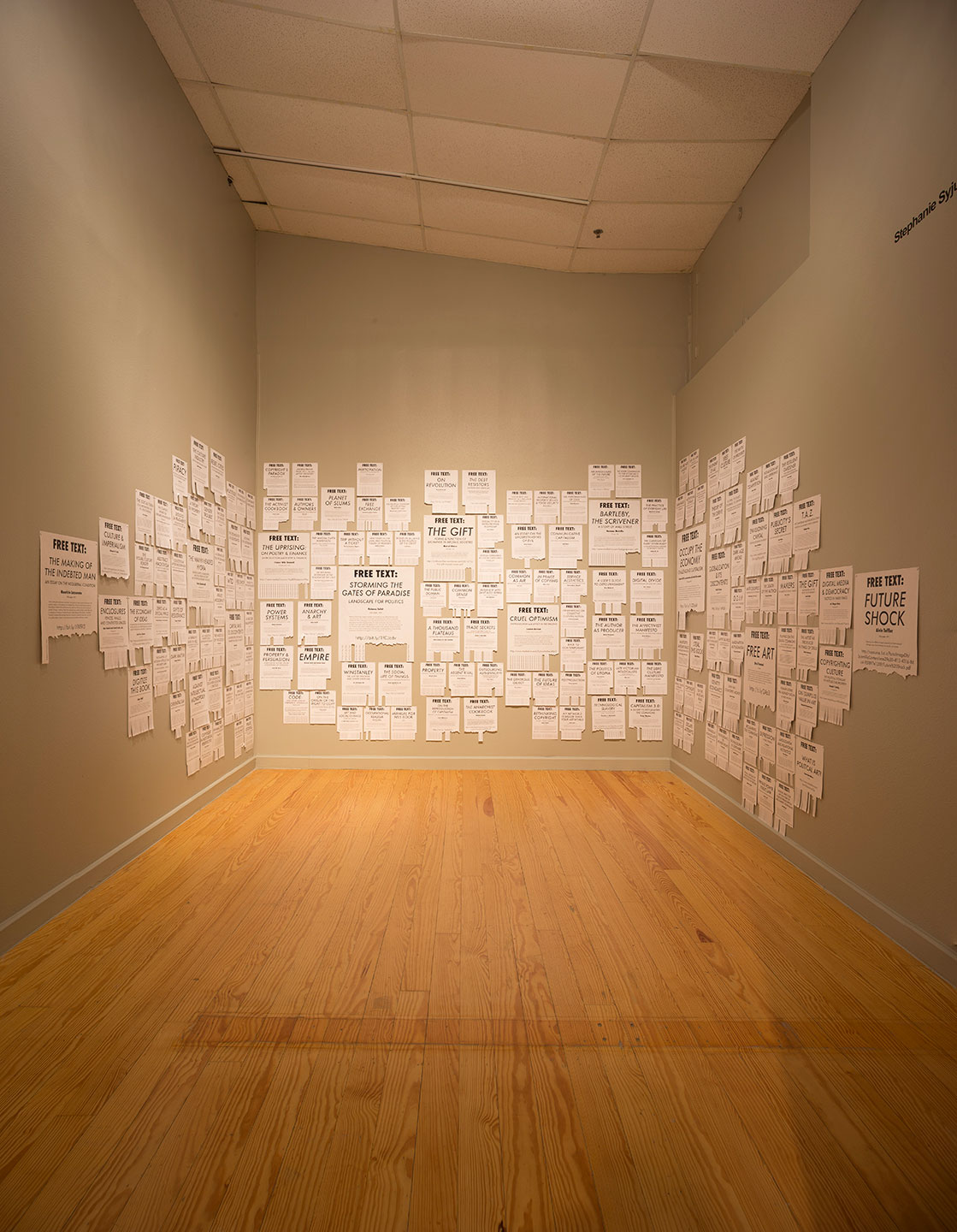 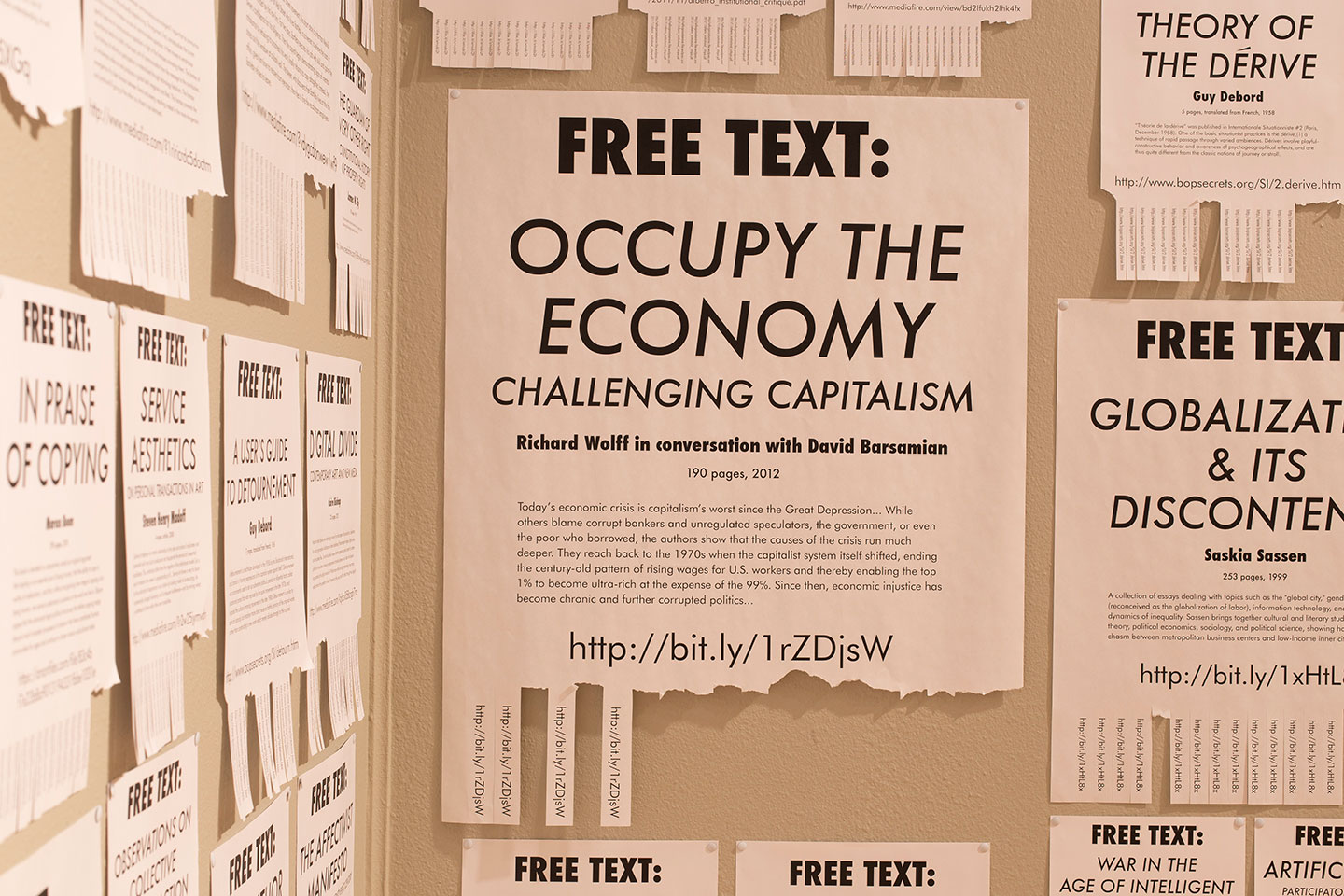 FREE TEXTS: An Open Source Reading Room functions as a physical archive for texts dealing with the thorny issues of digital copyright, open-source culture, alternatives to capitalism and the state of the intellectual commons in the twenty-first century. Visitors are invited to pull tabs from a wall of flyers advertising URLs so that they may download their own copy of that particular text, many of which have been illegally uploaded by anonymous file sharers around the world. The texts are curated around the history of the open-source movement, creative commons, remix culture, and challenges to copyright in the digital era, engaging the public in a lively dialogue of ownership and public access. File sharing and copyright infringement—of media, entertainment, creative works, and intellectual property—are hot political and cultural topics in a world increasingly seeking to commodify the production and dissemination of ideas and information.

The internet has created a seemingly endless amount of ways in which information can be spread, much to the consternation of copyright holders. Surprisingly, not only music and media are illicitly shared online but also texts, which are sometimes scanned directly out of books and traded within the academic community. A quick internet search can uncover an amazing amount of them, many ironically being themselves about open-source culture and copyright.

In a much larger context, the fight for access to cultural resources can also be linked to the fight for physical resources, such as in the field of agriculture and bioengineering, where corporations are claiming patents on genes of plants and animals. FREE TEXTS: An Open Source Reading Room is a space devoted to an urgent and pressing topic that will shape how the future accesses and produces culture.

Stephanie Syjuco creates large-scale spectacles of collected cultural objects, cumulative archives, and temporary vending installations, often with an active public component that invites viewers to directly participate as producers or distributors. Working primarily in sculpture and installation, her projects leverage open-source systems, shareware logic, and flows of capital in order to investigate issues of economies and empire. This has included starting a global collaborative project with crochet crafters to counterfeit high-end consumer goods; presenting a parasitic art counterfeiting event, COPYSTAND: An Autonomous Manufacturing Zone for Frieze Projects, London (2009); and Shadowshop, an alternative vending outlet embedded at The San Francisco Museum of Modern Art exploring the ways in which artists are navigating the production, consumption, and dissemination of their work (2010–11). She is currently collaborating with the FLACC Workplace for Visual Artists in Genk, Belgium, on a new body of works utilizing 3-D scanning of Belgian and Congolese antiquities to produce hybrid ceramic objects addressing the legacy of colonialism, empire, and trade routes.

Biography
Born in the Philippines, she received her MFA from Stanford University and BFA from the San Francisco Art Institute. She is the recipient of a 2014 Guggenheim Fellowship Award and a 2009 Joan Mitchell Painters and Sculptors Award. Her work has been shown nationally and internationally, including in exhibitions at MoMA/P.S.1, the Whitney Museum of American Art, SFMOMA, ZKM Center for Art and Technology, Germany Z33 Space for Contemporary Art, Belgium, Universal Studios Gallery Beijing, and the Contemporary Arts Museum Houston, as well the California Biennial at the Orange County Museum of Art, among others. In 2007 she led counterfeiting workshops in Istanbul and in 2009 contributed proxy sculptures for MOMA/P.S.1’s joint exhibition, 1969. Recently, she has expanded into the curatorial field with the exhibition Lossy at the Bemis Center for Contemporary Art and has essays included in the forthcoming Journal for Design Strategies published by Parsons The New School and in a book to be published by Phaidon on alternative art education.

A long-time educator, she has taught at Stanford University, The California College of the Arts, The San Francisco Art Institute, Mills College, Carnegie Mellon University, and most recently as Assistant Professor in Sculpture at the University of California at Berkeley in January 2014. At Berkeley she is working to expand a conceptual and materials-based pedagogy, combining methods of the handcrafted with digital technologies and social engagement in order to speak of the frictions within late-capitalist society. She currently serves on the Board of Directors at the Headlands Center for the Arts, and lives and works in San Francisco.