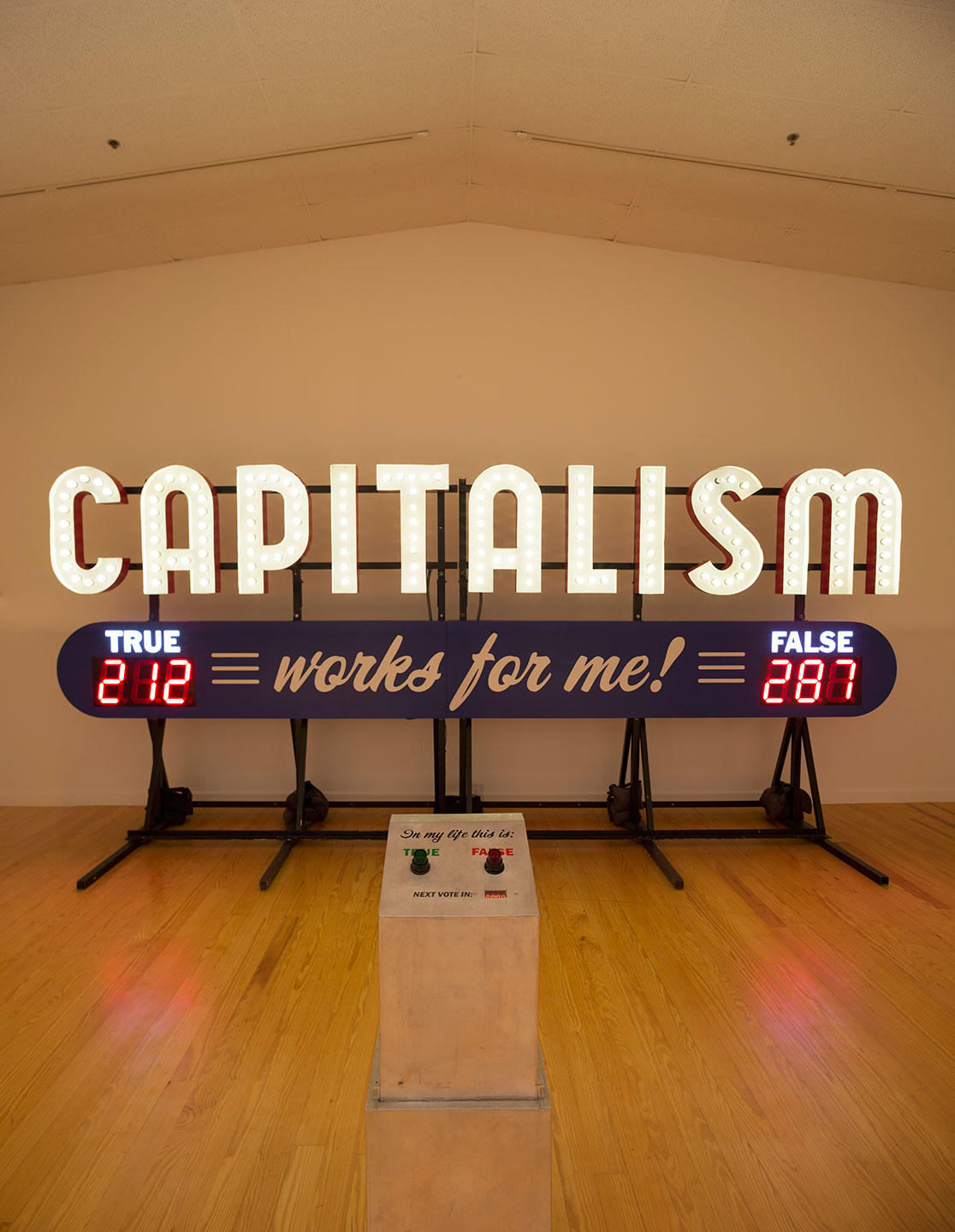 Steve Lambert, “Capitalism Works For Me! True/False”, 2011, Aluminum and electrical

Steve Lambert
Capitalism Works For Me! True/False, 2011
Aluminum and electrical

Starting a conversation about Capitalism is like walking up to a stranger and asking, “Can I talk to you about Jesus?”

The word “capitalism” is a red flag. And for good reason—pretty soon either some dude is talking your ear off about “The System” or aggressively confronting you about taxes. At the same time, capitalism is discussed every day using euphemisms like “jobs,” “job creation,” “the business climate,” and discussing whatever “crisis” is deemed relevant; a housing crisis, financial crisis, social security crisis, tax crisis, or fill- in-the blank crisis. But the whole is rarely a topic of frank discussion—much less alternatives or meaningful reform.

As a culture, we need the vision and boldness it takes to discuss the problem itself. The idea that “there is no alternative” to the way our world works takes away our ability to dream. As citizens we need the courage to begin these discussions on order to move on to new and better visions for the future. But what to do? Start a conversation about capitalism and friends edge away slowly, and strangers even faster. This is what art is for. This is what art does well. It creates a space where new ideas and perspectives can be explored. A space unlike any other.

Throughout my artistic career I’ve challenged myself to take on difficult subject matter in ways that are engaging and fun. I’ve found humor and popular culture can open doors to difficult but worthwhile subjects and enable us to envision and move toward new, utopian futures.

The sign started in Cleveland and toured the US leading up to and beyond the 2012 presidential election. People who voted were given the opportunity to have their portrait taken and give a short statement about why they voted the way they did. There is a book, website, and videos that document people’s interactions and thoughts. I’m excited that this piece takes on what for most Americans is a taboo, or even nonexistent subject: whether global, hegemonic capitalism actually works for most people. But whew, talking about that is boring! And telling people what to think is worse! This sign gets passersby to participate in deceptively simple vote (True/ False) which only pretends to offer resolution. Every aspect of the interaction draws them into more complex questions and conversations, leading to new thoughts and ideas about a better world!

For 50 years it has been unacceptable, politically, in the United States to ask what is basically a straightforward question. We have a particular economic system, it’s called capitalism. We have every right as a society to ask of that system, is it working? Is it working for us? Do the benefits and the costs balance themselves out in a way that says, do we want to keep this system? Or that says, we want to change this system? Or that says, we ought to look at an alternative system. We’ve been afraid to ask that question. We’ve been afraid to have public debates—that’s the legacy of the Cold War. We can’t afford anymore to not do that. We have to raise the question.

For me, art is a bridge that connects uncommon, idealistic, or even radical ideas with everyday life. I carefully craft various conditions where I can discuss these ideas with people and have a mutually meaningful exchange. Often this means working collaboratively with the audience, bringing them into the process or even having them physically complete the work.

I want my art to be relevant to those outside the gallery—say, at the nearest bus stop—to reach them in ways that are engaging and fun. I intend what I do to be funny, but at the core of each piece there is also a solemn critique. It’s important to be able to laugh while actively questioning the various power structures at work in our daily lives.

I have the unabashedly optimistic belief that art changes the way people look at the world. That belief fuels a pragmatic approach to bring about those changes.
– Steve Lambert

Biography
Steve Lambert’s father, a former Franciscan monk, and mother, an ex-Dominican nun, imbued the values of dedication, study, poverty, and service to others – qualities which prepared him for life as an artist.

Lambert made international news after the 2008 US election with The New York Times Special Edition, a replica of the “paper of record” announcing the end of the wars in Iraq and Afghanistan and other good news. In the summer of 2011 he began a national tour of Capitalism Works For Me! True/False. He has collaborated with groups includung the Yes Men, the Graffiti Research Lab, and Greenpeace. He is also the founder of the Center for Artistic Activism, the Anti-Advertising Agency, Add-Art (a Firefox add-on that replaces online advertising with art) and SelfControl (which blocks grownups from distracting websites so they can get work done).

Steve’s projects and artworks have won awards from Prix Ars Electronica, Rhizome/The New Museum, the Creative Work Fund, Adbusters Media Foundation, the California Arts Council, and others. Lambert’s work has been shown everywhere from museums to protest marches nationally and internationally, featured in over fourteen books, four documentary films, and is in the collections of The Sheldon Museum, the Progressive Insurance Company, and The Library of Congress. Lambert has discussed his work live on NPR, the BBC, and CNN, and been reported on internationally in outlets including Associated Press, The New York Times, the Guardian, Harper’s Magazine, The Believer, Good, Dwell, ARTnews, Punk Planet, and Newsweek.

He was a Senior Fellow at New York’s Eyebeam Center for Art and Technology from 2006-2010, developed and led workshops for Creative Capital Foundation, co-directs the Center for Artistic Activism, and is an Assistant Professor at SUNY Purchase. In 2013 he was invited to speak at the United Nations about his research on advertising’s impact on culture. Steve is a perpetual autodidact with (if it matters) advanced degrees from a reputable art school and respected state university. He dropped out of high school in 1993.