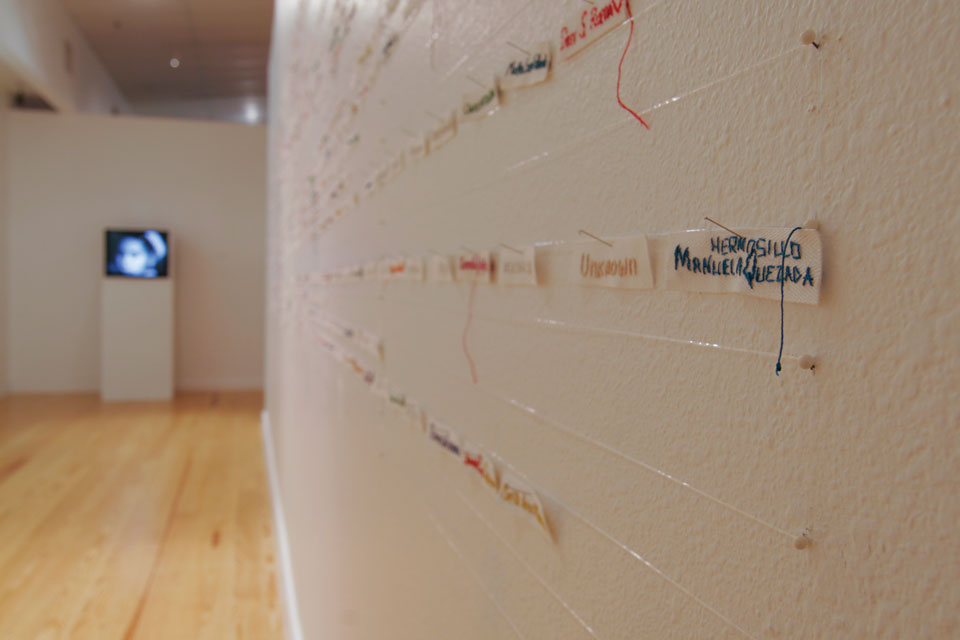 My intention with this project has been to set women’s struggles on the agenda through a traditionally female activity: embroidery. Embroidery is an intimate and time-consuming activity, and historically, women have embroidered the names of their loved ones onto such labels.

In this project, this wall is a testimony to each woman, both the living and the dead. The viewer becomes a witness, connecting to the traces of each others existence. The traces of these women are crossing symbolically over the surface as they connect to each other through the threads and fabric. Visually, each embroidered name, even the ‘unknown’, contains traces of the woman who embroidered. It is through her handwriting, her choice of colours and stitches that she leaves behind a trace of herself. I also believe the dead woman’s name has left a trace with the embroiderer through the time and care she had to use in order to embroider, while simultaneously hearing the stories of the individual girls and women.

I have installed the labels using Morse code. I have translated the Mexican National Anthem into morse code, letting the dots be the unknown labels and the dashes be the identified names. . . . The anthem ends when the last woman identified up to the present, appears.  The anthem is still unfinished, as it ends in the second chorus. . . . After receiving more than a 1000 labels that have traveled all over the world, I have an overall feeling that we do care and we do make connections. The women in the city of Juárez, although unknown and unseen, matter to a woman living in a remote northern village of Norway, or in a town in the Philippines, or a busy city in UK.  I think the act of embroidering, which is so tactile and repetitive in motion, becomes a meditative way to connect to our own awareness and become open to connect to others. . .

Lise Bjørne has created a network of people embrodering the names of the missing and unknown victims and organized different workshops around the world to in order to disseminate information on the femicide in Juárez.  By communally creating art, these works connect the local with the global and in doing so create an international dialogue. 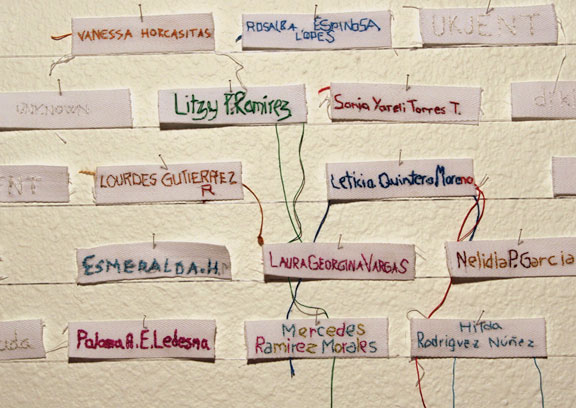