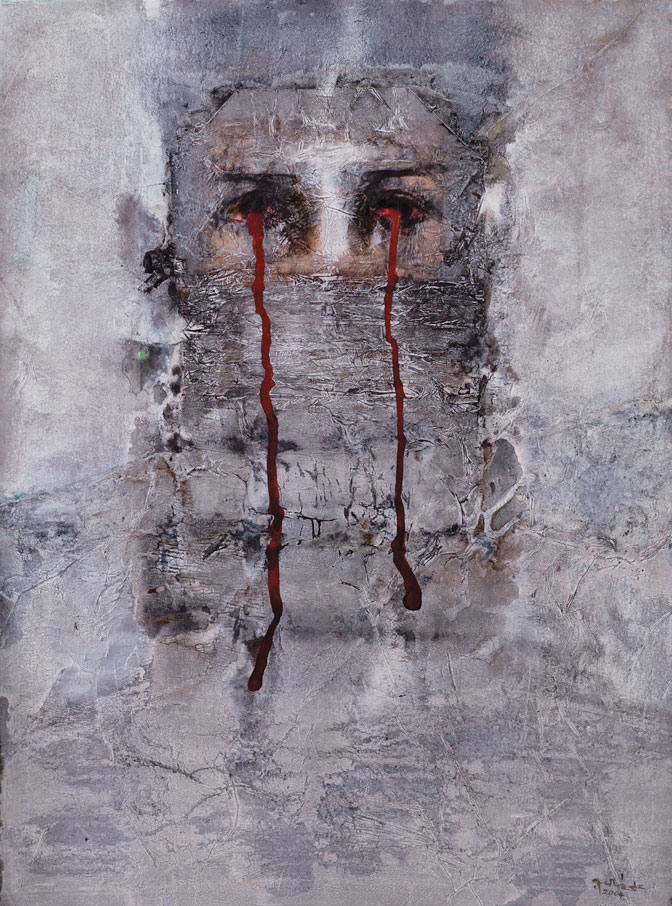 Dating back to over six thousand years ago, Mesopotamia—commonly referred to as the “Cradle of Civilization”—is richly diverse in its cultural heritage, as each culture, old and new, has left a significant mark on the history of Iraq. Ali Talib Alkayali’s sculpture Birth serves as a metaphor for the cultural influences in the region. The sculpture’s form is one of a giant, double-sided head positioned upside down. On the front of the sculpture are markings of a prominent brow and the bridge of a nose. This is the face of tradition. On the other side of the sculpture is a representational form of a vagina, which serves as a metaphor for reproduction, for birth. The dual imagery in Ali Talib’s Birth addresses and communicates the polarities of life and death. 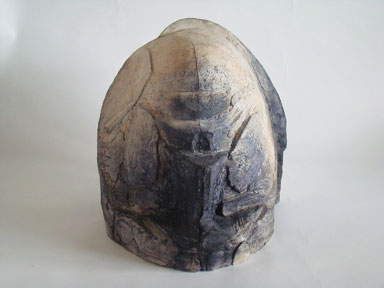 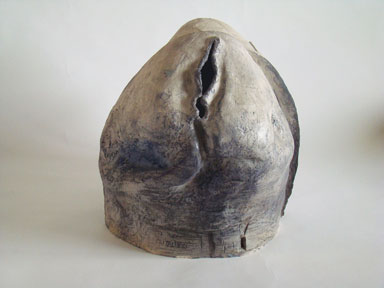 Ali Talib’s installation To Whom It May Concern underlines the suffering and death endemic to the lives of the Iraqi people. These carved-gypsum multiethnic heads buried in sand are the reminders of the horrific and ongoing massacre of his people. To the occupier, these are the faces of the enemy; to the occupied, they are the faces of fallen fathers, mothers, sons, and daughters.

ALI TALIB ALKAYALI
born in Basra, Iraq, 1944.
Ali Talib Alkayali obtained a BA in painting from the Academy of Fine Arts, Baghdad in 1966 and later received a MA in graphic design from the Helwan University, Cairo, Egypt, in 1980. He worked as a lecturer of Plastic Art at the Academy of Fine Arts in Baghdad as well as the Al Yarmouk University in Jordan. His artworks have been exhibited in one-man shows in distinguished museums and galleries in Iraq, Kuwait, Jordan, Lebanon, Bahrain, Dubai, and the Netherlands. He has participated in exhibitions in Iraq, Cyprus, India, Italy, France, Morocco, United Kingdom, Egypt, Turkey, Kuwait, Jordan, United States, Dubai, Sharja (UAE), Finland, Lebanon, Vienna, St Petersburg, and the Netherlands. His work can be viewed in the permanent collections of the Institute of Arab Art in Paris, France; the World Museum in Rotterdam, Netherlands; and the Station Museum of Contemporary Art in Houston, Texas. He currently lives in the Netherlands.