Bilad Al-Sawad is Arabic for black-ore, fertile land. Dia Azzawi’s work symbolizes the motivations behind the perpetual wars against the Middle Eastern people. Dia is a significant figure in modern Iraqi art. He earned a reputation for both his devotion to the visual heritage of his home country and for the emotional response in his work that addresses critical issues such as violence and suffering. Dia’s artwork references his land as an “active theatre of combat” that, metaphorically, is turning Iraq upside down. 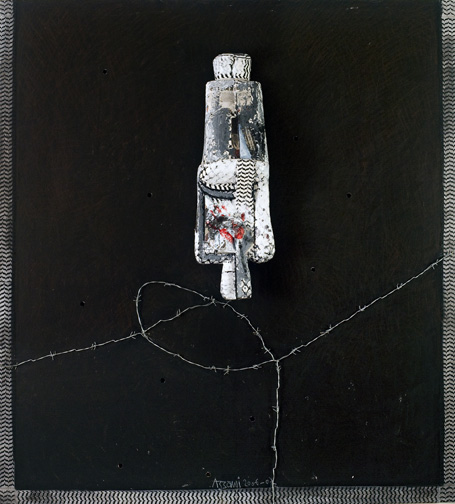 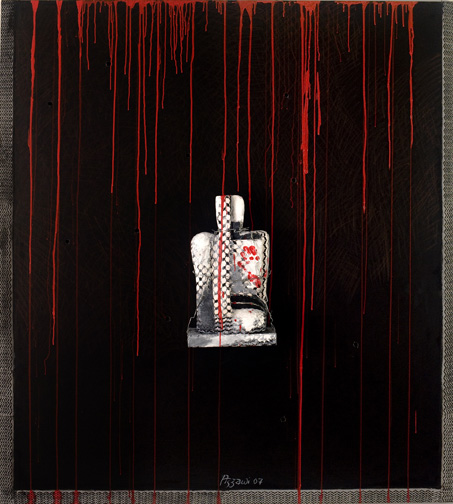 DIA AZZAWI
born in Baghdad, Iraq, 1939.
Dia Azzawi received a BS in archaeology from the Baghdad University in 1962 and a BA in fine arts from the Institute of Fine Arts, Baghdad in 1964. Dia has participated in numerous group exhibitions in Beirut, Rome, Vienna, Baghdad, Paris, and London. His work also has been included in a number of international exhibitions, such as the 1976 Venice Biennale, the 1979 São Paulo Biennial, and the 1992 International Cairo Biennale, where he was awarded a jury prize. Solo presentations of his paintings, graphic, and book works have been held in Baghdad, Paris, Geneva, Kuwait City, Tripoli, Abu Dhabi, Toronto, Amman, Stockholm, and Washington, DC. Institutions that have collected his work include the Institut du Monde Arabe in Paris, France; the British Museum, and the Victoria and Albert Museum in London, UK; and national museums of Modern Art in Syria, Tunisia, and Jordan. Dia is an Arab Colorist; his pallet and imagery suggest an intense admiration for his country, from which he was forced to leave. Although living in London for the last 32 years, Dia proclaims, “I may be British on paper, but in reality I’m an Arab. The colors I use are also Arab.” He currently lives in London, UK.