The seven photographs are stills taken from Jananne Al-Ani’s film Muse. The photographs depict “a smart suited man emerging from a desert heat-haze and proceeds to walk restlessly back and forth along the same strip of barren earth. [The] passage of time [is] marked by changes in the light and a shift in the lengthening, deepening shadows.”1 While this series symbolically represents the reoccupation of the land, its essential purpose is to communicate the loneliness of the lone wanderer, the exile. 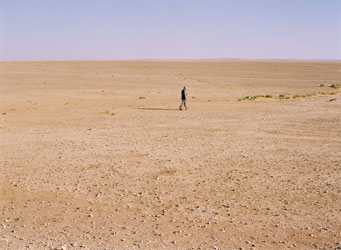 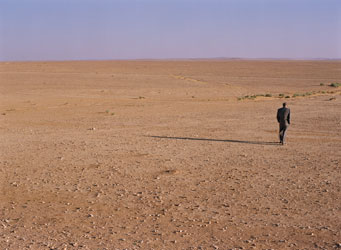 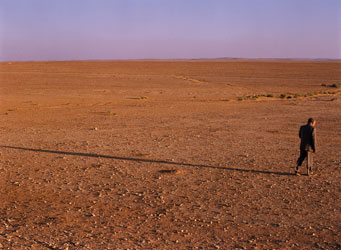 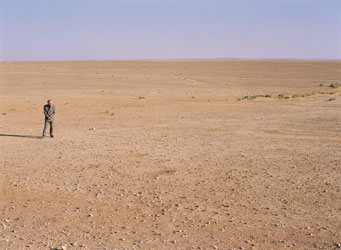 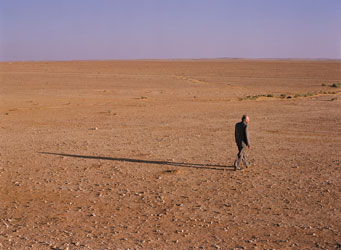 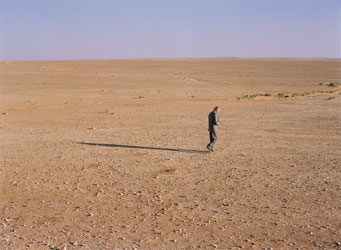 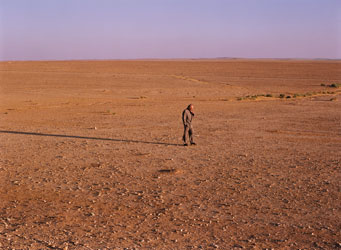 JANANNE AL-ANI
born in Kirkuk, Iraq, 1966.
Jananne Al-Ani was born to an Iraqi father and an Irish mother in Kirkuk. She is primarily a video and multimedia installation artist and in 1980 emigrated from northern Iraq to England, where she trained at the Byam Shaw School of Art, earning a fine art diploma in 1989. Jananne earned a BA in Arabic from the University of Westminster in 1995 and a MA in photography from the Royal College of Art in 1997. Jananne has exhibited widely in the United States and Europe. In 1999, she mounted solo shows at the Imperial War Museum in London and at the Smithsonian Institution in Washington, DC. In 2004, she participated in the group exhibition Beyond East and West: Seven Transnational Artists at the Krannert Art Museum in Champaign-Urbana, Illinois, and in 2005 in the exhibition The World is a Stage: Stories Behind Pictures at the Mori Art Museum, Tokyo. In 2006, her work was included in the show Seventeen Ways of Looking at the Museum of Modern Art in New York City. Her work has earned her a number of awards, including a South Bank Photo Show prize, 1991; the John Kobal Photographic Portrait Award, 1996; a Fuji, Joe’s Basement & RCA Award, 1996; a Renaissance Art Award, 1997; an Arts Council Grant, 1998; and the East International Award, 2000. She currently resides in London, UK.