This Exhibition is Dedicated to
SHAKIR HASSAN AL SAID

From the first manifesto of the Baghdad Group of Modern Art:

We wanted to clarify to Iraqi artists in general, and to ourselves as an art group in particular, that istilham alturath (seeking inspiration from tradition) is the basic point of departure to achieve a cultural vision through modern styles. 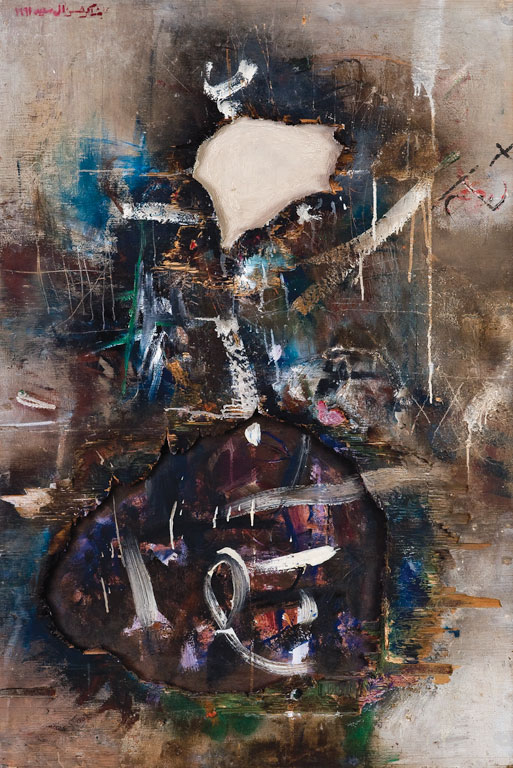 SHAKIR HASSAN AL SAID
born in Samawa, Iraq, 1925 (d. 2004).
Shakir Hassan Al Said graduated in social sciences from the Higher Institute of Teachers, Baghdad in 1948 and in art from the Institute of Fine Arts, Baghdad in 1954, where he was taught art history by the artist Jawad Salim. Along with Jawad, he co-founded the Baghdad Group of Modern Art in 1951. Between 1955 and 1959, Shakir obtained a scholarship to study in Paris at the Académie Julian, the École Nationale Supérieure des Arts Décoratifs, and the École Nationale Supérieure des Beaux-Arts. He then returned to Baghdad where he taught art history at the Institute of Fine Arts from 1970–80 and began his writings on art, including the Contemplative Art Manifesto in 1966. By 1971, following the theoretical framework he had developed, Shakir formed the One Dimension Group, which focused on the exploration of the different values of the Arabic script—graphic, plastic, linguistic, and symbolic—in modern art. Shakir received several awards, and his work has been shown in numerous solo and group exhibitions worldwide.