Adnan Yahya lives with his family in a refugee camp in Amman, Jordan. His portrait is a bitter caricature of Israel’s current Prime Minister Ariel Sharon depicted in the act of torturing a Palestinian. The box of matches marked with the US flag refers to the vast military aid that the United States government provides to Israel, and the painted internal framing devices also remind the viewer of the role of the United States in encouraging Israel’s ongoing aggression.The lurid colors communicate a sense of the deathly, unnatural and unhealthy atmosphere that Sharon’s rightwing government has fostered.

Adnan Yahya
born in 1960 in the Wihdat refugee camp near Amman.
Education. Studied at Teachers College of amman and Later at Institute of Fine Arts
lives and works in al-Nuwwarah near Amman, Jordan 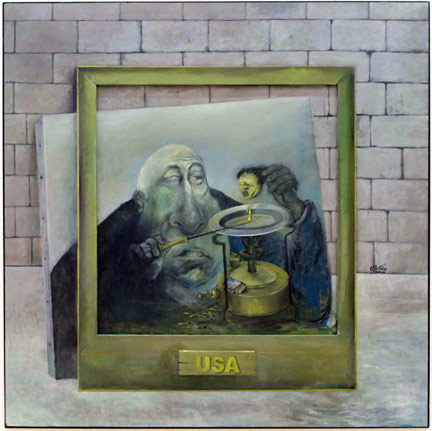