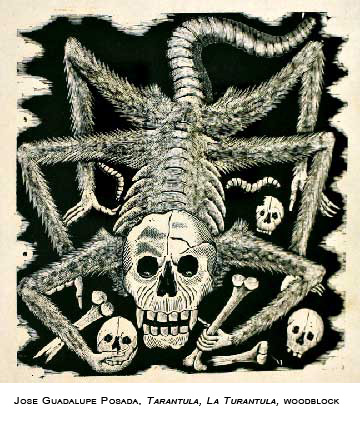 José Guadalupe Posada was born in 1852 during a time when Mexico was carving out a new identity – one ignited by the spirit of national independence and the hope for a people’s government under Benito Juárez.  The struggle for ‘land and liberty’ was far from being over, and it escalated during the Christian wars.  The soil became saturated with the people’s blood resulting from thirty years of Porfirio Díaz’s tyranny (1876-1910).  After Díaz’s dictatorship, Victoriano Huerta assassinated the first legitimate president of Mexico, Francisco I. Madero, creating a wave of anger that became the catalyst for revolution. The piece entitled Huerta Calavera portrays Huerta as a treacherous tarantula-like creature.  Posada’s Calavera Revolucionario captures General Emiliano Zapata’s mythical image charging into battle without remorse or fear.  His work etched the path of revolution; his draftsmanship and allegiance to the working class inspired the masters like José Clemente Orozco and Diego Rivera. 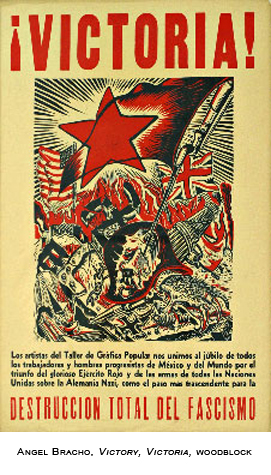 President Lázaro Cárdenas (1934-1940) created the environment for progressive writers and artists to work for social and political change in Mexico. During his presidency, the Popular Graphic Art Workshop (TGP) became a center of graphic arts that supported the working class fight for land and freedom.  This work is as relevant today as it was at the time that it was created.