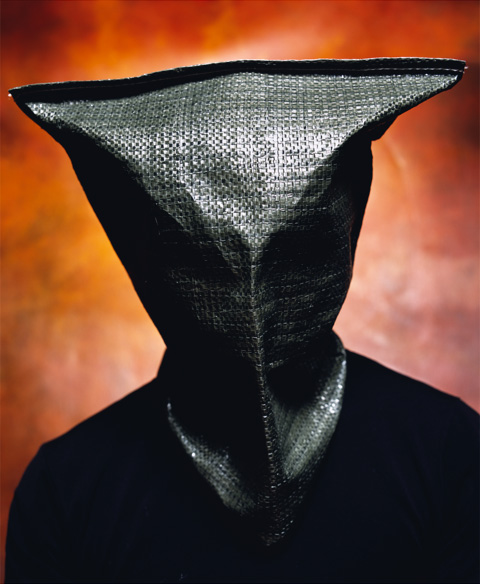 “It’s easy to torture people when you have power over them.” – Andres Serrano

At The Foundry, an experimental space in the French industrial town of Maubourguet, Andres Serrano assumed the role of the torturer. Under the guidance of military personnel, Serrano photographed more than 40 models in degrading positions, using devices that were produced on-site by the local residents. The models suffered humiliation and actual physical distress as they were shackled, submerged and forced into stress positions for extended periods of time.

Both mental and physical techniques were used on his subjects, as Serrano chose to enter into a lineage of perverse experimentation for punishment or coercive means. During the Holocaust, brutal medical testing included sterilization, needless amputations and the conjoining of twins for the sadistic physical and ideological advancement of the Nazi race. Not long after, the architects of horror changed from physicians to psychologists, informing Stasi interrogators and laying the foundation for the CIA’s covert torture program. Inspired, in part, by the methods the British Government used in Northern Ireland during the time of “The Troubles”, the reoccurring ‘deep interrogation’ tactics comprised of five techniques, wall-standing, hooding, subjection to noise, deprivation of sleep, and deprivation of food and drink.

Society is numbed, in a world seemingly apathetic to the global web of covert state-sanctioned torture policies. Believing that these heinous techniques are used for our own security, we give up our freedoms to become slaves, metaphorically shackled and humiliated by our own naivety. Serrano offers a way out – inviting the audience to adopt his gaze. Now the torturers, we are aroused. Awoken from our slumber, we are both seduced and appalled by the contemporary icons of warfare, the martyrs we were not meant to see.

– Torture was initiated and produced by a/political

ABOUT STATION MUSEUM OF CONTEMPORARY ART

The Station Museum of Contemporary Art is an exhibition forum for local, national, and international artists, with an emphasis on fine arts that reflects the cultural diversity of Houston’s communities. The museum has held comprehensive exhibitions from Mexico, Peru, Venezuela, Colombia, Congo, South Africa, Czech Republic, Austria, Palestine, Iraq, India, Afghanistan, and Russia. As an institution that supports local and Texas art, the Station has organized significant solo exhibitions by Mel Chin, James Drake, Dick Wray, Jesse Lott, George Smith, and group exhibitions that bring Texas artists together with national and international artists.

The Station Museum of Contemporary Art organizes exhibitions that question our society’s morality and ethics. It embraces the idea that art plays a critical role in society as an agent of creativity and civil discourse and as a resource that deepens and broadens public awareness of the cultural, political, economic, and personal dimensions of art.

a/political is a not-for-profit organization, collaborating with socio-political artists. a/political, initiate, produce and tour large-scale projects world-wide. With offices based in London, a/political opened The Foundry as an experimental art space, hosting ambitious projects outside the controls of the contemporary art market. Artists are invited to produce new work in the neighboring factories. In addition, a/political acquires artworks for permanent installation at The Foundry to compliment the collection currently located in London.