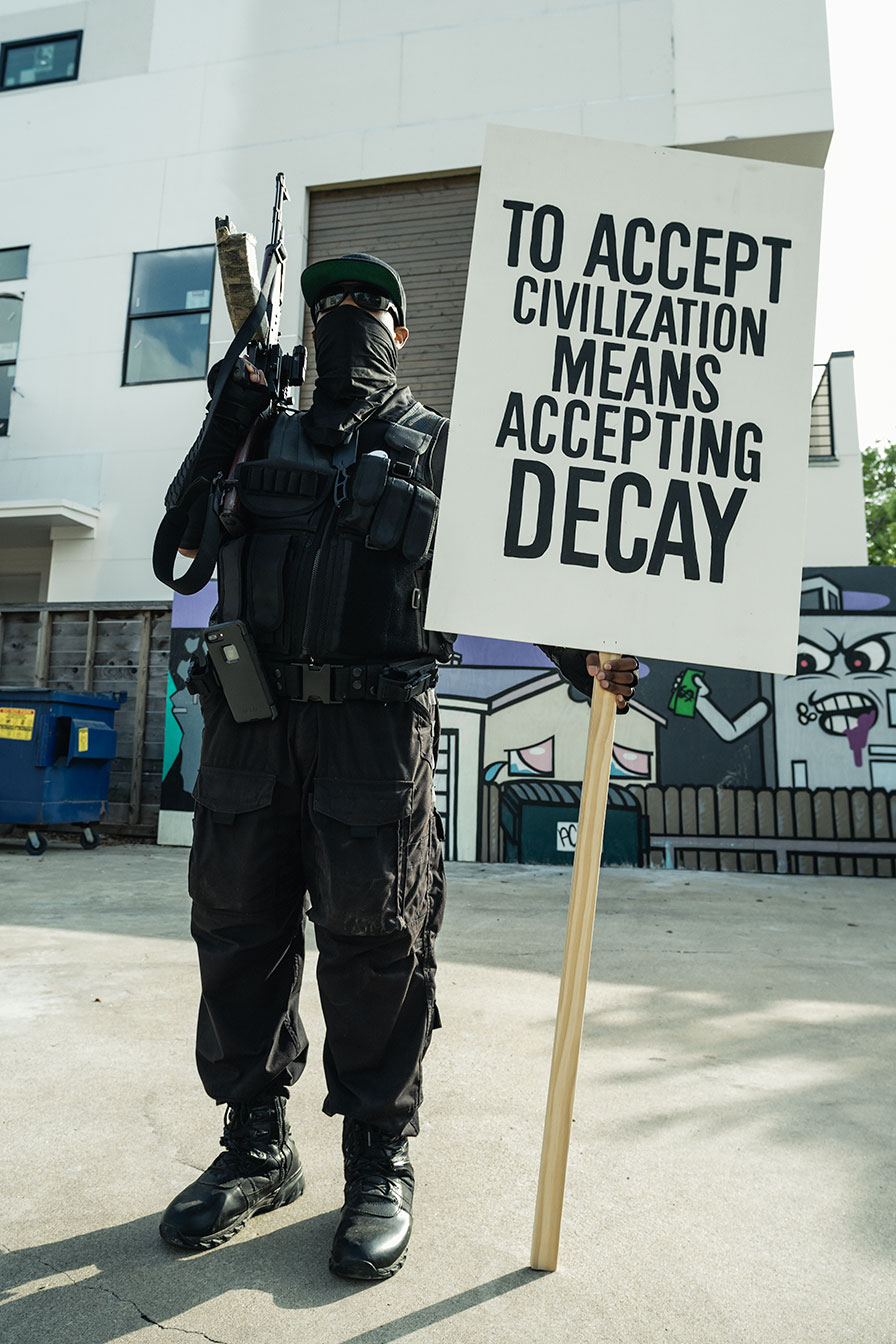 The Station Museum of Contemporary Art is pleased to announce the opening of art collective DEMOCRACIA’s new work ORDER, an expansive operatic condemnation of global capitalism and imperialism, on Saturday, April 27, 2019 at 7PM. ORDER will be presented alongside We Protect You From Yourselves (2013-2016), a series investigating the image of the riot policeman as one of repression-come-spectacle.

Filmed in Houston, Dublin, and London, ORDER moves between open-carry rallies, suburban shopping malls and lavish dinners, to present in its melodrama the historic antagonisms between the oppressors and the oppressed. It deftly utilizes filmed intervention to present the high absurdity of the economic and social system in which we live. The locations selected for the interventions highlight the evidence in the built environment of the deep chasms between the haves and have-nots.

Presented as film and installation, ORDER is an opera that seeks to radically critique the conventions and injustices of capitalism. The artwork presents in its three acts: Eat the Rich/Kill the Poor; Konsumentenchor (Choir of Consumers); and Dinner at the Dorchester. Each act presents dramaticized analogues of our reality through carefully engineered interventions in public and private spaces. By shifting production away from the constrictions of the theater and its bourgeois environment, ORDER violently disrupts the cultural grammar of opera. DEMOCRACIA uses this artform as a tool with which the ruling classes may be pilloried, lambasted, and held to account.

The libretto of ORDER is inspired by Hesiod’s didactic poem “Works & Days,” in particular, its telling of the “Myth of Five Ages.” Believed to have been written during the Ancient Greek agrarian crisis, a time of colonial expansion, debt-slavery, and class war, “Works & Days” bears stark correlations to our present context. In this passage, Hesiod details the “race of iron,” an age where “men never rest from labour and sorrow by day, and from perishing by night;” an age in which “men will praise the evil-doer and his violent dealing.” DEMOCRACIA seize the central premise of Hesiod’s poem and transform it into a scathing discourse on the machine of modern capitalism.

Presented alongside ORDER will be DEMOCRACIA’s last major series We Protect You From Yourselves (2013-16). Through this body of work, DEMOCRACIA examines the image of riot police as a spectacle of repressive power. Police actions target any social or political initiative that are perceived as being contrary to the dominant economic, social and political order, they are the apparatus by which the state protects and serves the interests of ruling elites, corporations and institutions using lethal and non-lethal violence as its primary means of asserting this control. This inalienable reality of policing is juxtaposed with their own internalised delusion of existing to protect and serve the people.

ORDER is a joint commission between a/political & Station Museum of Contemporary Art, produced with the assistance and support of CANADA & Rua Red Gallery. 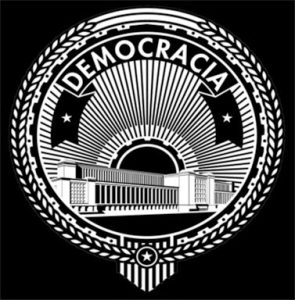 DEMOCRACIA is an artistic collective based in Madrid, Spain. Formed in 2001, their collaboration seeks to center artistic production on collectivity, discourse, dissensus, and conflict. DEMOCRACIA’s work is characterized by their ambitious and provocative social interventions, politicizing spaces and situations through the apparatus of propaganda.

Their projects reflect concerns with so-called progressive societies; visible in the increasing importance of the image and in the gradual incorporation of simulacrum into different realms of daily life. These concerns are expressed through forms subverting and repositioning the aesthetic material and textual rhetoric of Western political cultures. In doing so, their practice presents a radical critique of societal/political/economic institutions, systems, and conventions.

a/political is a non-profit art organization that provides an inclusive space that prioritises intellectual curiosity and informed discourse around social and political concerns through contemporary arts and cultural practices. It encourages the exploration of radical knowledge, platforming voices that interrogate the critical issues and dominant narratives of our time. Through rigorous cross-disciplinary experimentation, a/political collaborates on large-scale projects previously thought unrealisable due to their scale, logistical complexity and/or subject matter. Projects are produced, exhibited and toured worldwide. In addition to the long-term projects, a/political continues to acquire historical artworks for its collection.

IRVIN TEPPER: EVIDENCE OF PHANTOMS MADE REAL BETWEEN THOUGHTS