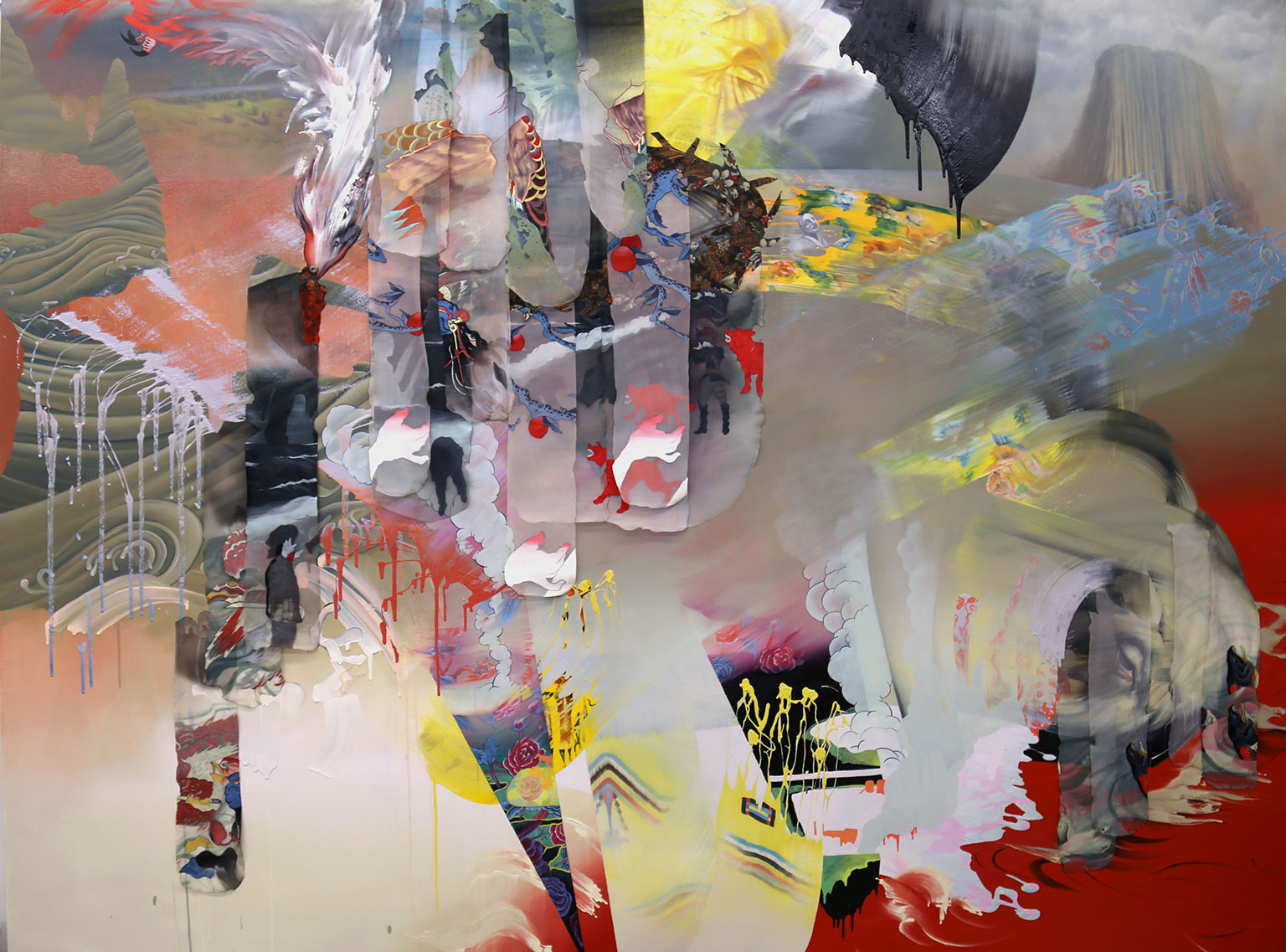 in(di)visible is an exhibition examining immigration, the residual effects of war, and the implications of assimilation, integration, and invisibility for Asian Americans. From the intergenerational trauma of war and the impossibility of articulating what is lost between generations to the legacy of federal policies such as the Chinese Exclusion Act of 1882, the first law implemented to prevent a specific ethnic group from immigrating to the United States, and Executive Order 9066 in 1942, which authorized the forced relocation and incarceration of between 110,000 and 120,000 people of Japanese descent, 62 percent of which were United States citizens.

Reinforced through systematic subjugation and discrimination, the myth of the ‘model minority’ obscures the lived experiences of people perceived as Asian in America and is often used as a wedge between them and other marginalized groups. A pervasive disconnect exists between Hollywood depictions of Asian people in America and the breadth and variety of the people inhabiting those realities. Within the American mass media directed cultural narrative, accurate or comprehensive depictions of daily life are almost never platformed while the oppression of Asian American people as a political entity is rarely highlighted outside of the context of comedy. These artists use their experiences to bring visibility and add nuance to the cultural understanding of Asians in America.

Mel Chin’s art, which is both analytical and poetic, evades easy classification. Politics, ecology and economics are but a few of the disciplines that intersect in his work. He insinuates art into unlikely places, including destroyed homes, toxic landfills, and even popular television, investigating how art can provoke greater social awareness and responsibility.

Pao Houa Her is recognized for her provocative photographs of the Hmong, the indigenous people of Laos who immigrated to the United States following the Vietnam War. Her’s work sensitively documents the larger ethnic Hmong culture that became increasingly established in various locations in the United States in the late 1970s and 1980s.

Kenneth Tin-Kin Hung employs and remixes images from popular culture, political figures, and imagery found in cyberspace. His socially conscious artworks adopt the form of advertising in a reduction of contemporary events to a cartoon-like mythology. Through various media, Hung aims to explore the nature of digital communication while touching on issues such as identity, politics, sexuality, and power.

Miao Jiaxin’s works often express the ambivalent and sometimes antagonistic tension that always exists between the individual and governing or cultural authorities, questioning assumptions about power in relation to identity politics.

Hung Liu’s paintings utilize a kind of weeping realism that surrenders to the erosion of memory and the passage of time, while also bringing faded photographic images vividly to life as rich, facile paintings. She summons the ghosts of history to the present. In effect, Liu turns old photographs into new paintings.

Zeus Paredes was born in Manila, Philippines, Zeus came of age in the midst of a chaotic political time — Ferdinand Marcos’ rule as president of the country. For the last decade, Zeus has been rediscovering his artist’s voice culminating in over 100 pieces focused on his representation of the human experience through pen and ink.

Lien Truong blends American and Asian imagery and technique to examine the cultural and political conditions embodied in America’s founding and ongoing agrarian philosophy, and how this symbolizes the values of Manifest Destiny and the creation of America as a State formed by colonization, diverse immigrant groups and slaves. She uses images of violent American imperialism and the white male lineage of American painting (Lichtenstein, Hudson River School) to refer to the similar narrow perspective and global dominance.

Dan S. Wang works in the relationships between art + politics, critical reflection + social action, place + history. His research includes inquiries into the postindustrial cultural politics of the Midwest, letterpress printing as an archaeology of obsolescence, race and difference in the theater of crisis capitalism, and the cultural landscape of post-socialist China.

Hồng-Ân Trương’s projects underscore the ideological underpinnings of historical narratives and raise questions about the elision and repression of the present moment in the service of the past. Her approach to collaboration engages participants in an experience that connects political concepts with personal experience, the possibility for difference and social change.

Hồng-Ân Trương and Hương Ngô’s performance of AND AND AND will take place on Sunday, February 4, 2018. Time TBA.

Featuring: The Black Lunch Table (BLT) is an oral-history archiving project and an ongoing collaboration between North Carolina-based professor and artist Jina Valentine, and New York-based artist Heather Hart. The BLT’s primary aim is the production of discursive sites, wherein cultural producers engage in dialogue on a variety of critical issues. BLT mobilizes a democratic rewriting of contemporary cultural history by animating discourse around and among the people living it.