The Station Museum of Contemporary Art is pleased to host Nkame, a solo exhibition dedicated to the work of the late Cuban printmaker Belkis Ayón (1967-1999), who, during her short but fertile career, produced an extraordinary body of work central to the history of contemporary printmaking in Cuba.

Nkame: A Retrospective of Cuban Printmaker Belkis Ayón opens Saturday, June 2nd, 2018 at 7PM and runs through September 3rd, 2018. The exhibition presents 47 prints and audiovisual materials that encompass a wide range of the artist’s graphic production from 1984 until her untimely passing in 1999. Ayón mined the founding narrative of the Afro-Cuban all-male fraternal society called Abakuá Secret Society to create an independent and powerful visual iconography. She is highly regarded for her signature technique of collography, a printing process in which a variety of materials are collaged onto a cardboard matrix and run through a press. Her deliberately austere palette of subtle black, white, and gray, adds drama and mystery to her works, many of which were produced at a large scale by joining multiple printed sheets.

“Ayon´s masterful collographs gave the Abakuá legend, which has been transmitted orally, a powerful iconography it did not previously have. But it must be said that her intention was not perpetuation of the myth, but rather transgression of it,” said the curator of the exhibition, Cristina Vives. “Her treatment of the myth requires sharp, active, and critical engagement by the viewer.” Vives continued, “Unfortunately, during her short life, her work was not always afforded such rigorous understanding.”

Ayón’s choice of subject matter—the history and mythology of Abakuá—was a direction she took in 1985 while still a high school student at the San Alejandro Academy of Fine Arts. This brotherhood arrived in the western port cities of Cuba in the early 19th century, carried by enslaved Africans from the Cross River region of southeastern Nigeria, and since then became a nucleus of protection and resistance for its members. A brief synopsis of the founding myth of Abakuá begins with Sikán, a princess who inadvertently trapped a fish while drawing water from the river. She was the first to hear the unexpected and loud bellowing of the fish, the mystical “voice” of Abakuá. Because women were not permitted this sacred knowledge, the local diviner swore Sikán to secrecy. Sikán, however, revealed her secret to her fiancé, and because of her indiscretion was condemned to death. In Ayón’s work, Sikán remains alive, and her story and representation figure prominently. “Beyond the legend, her work manages to express the profoundly social and liberating message to which she aspired, and which is contained behind the veil of a myth.”, Vives said.

Nkame: A Retrospective of Cuban Printmaker Belkis Ayón is organized by the Estate of Belkis Ayon in Havana. The exhibition had its premiere in the United States in 2016 at the Fowler Museum at UCLA, Los Angeles, and has been presented at El Museum del Barrio, New York, NY, and the Kemper Museum. Kansas City, MO. Upcoming venues include the Scottsdale Museum of Contemporary Art, Scottsdale, AZ, The Museum of Contemporary Art, Santa Fe, NM, and The Schnitzer Museum of Art, University of Oregon, Eugene, OR. The museum tour is organized by Landau Traveling Exhibitions, Los Angeles, CA.

“Nkame is not simply an homage to Belkis Ayón but a possibility to dialogue with her work in quest of that affirming message of life and future that humanity needs.”

About Belkis Ayón
Ayón was born in Havana, Cuba in 1967 and studied at the prestigious San Alejandro Academy of Fine Arts and then the Instituto Superior de Arte (ISA), graduating in 1991. Her first solo exhibition, Propuesta a los veinte años (Proposal at the Age of Twenty), took place in Havana in 1988. She became a professor of engraving at the San Alejandro Academy and at ISA in 1993. In the same year, she participated in the 16 th Venice Biennale and received the international prize at the International Graphics Biennale in Maastricht, Holland. The Museum of Contemporary Art (MOCA), Los Angeles, invited Belkis to participate in the Kwangju Biennial in 1997. Subsequently, the Norton Family Foundation, MOCA, and the Museum of Modern Art in New York acquired her works. During the last year of her life, she had four residencies in the U.S. Her solo exhibitions include Desasosiego (Restlessness), Couturier Gallery, Los Angeles (1998); Belkis Ayón. Unterstützemich, haltemichhoch, im Schmerz (Be Supportive of Me, Keep Me Upright in My Pain), Ludwig Forum für Internationale Kunst, Breining, Germany (1995); and Siempre vuelvo (I Always Return), Centro Provincial de Artes Plásticas y Diseño, Havana (1993). Her work has been included in numerous group exhibitions and is in museum and private collections worldwide. The artist committed suicide in 1999 at the age of thirty two.

Book Available for purchase at the Station Museum of Contemporary Art 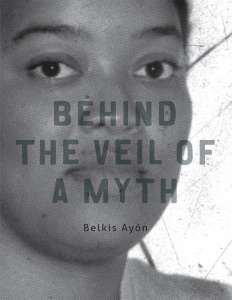 Book Available at the Station Museum of Contemporary Art “Behind the Veil of a Myth: Belkis Ayón”

BEHIND THE VEIL OF A MYTH: BELKIS AYÓN

Behind the Veil of a Myth considers the most significant moments of the creative process of Cuban printmaker Belkis Ayón (Havana, 1967- 1999) following a virtual tour of the exhibit Nkame. A Retrospective of the Cuban Printmaker Belkis Ayón, showed in Cuba for the first time in September 2009 and traveling several museums in the United States since 2016. Based on the study of Belkis Ayón’s work by curator Cristina Vives, as well as on parts of an interview with the artist, and extensively illustrated with the 48 pieces that make up the exhibition among others, Behind the veil of a myth offers a description of Belkis’s creative life and the main motivations that led her to an investigation that totally absorbed her short but intense artistic life: The Abakuá religion and secret society. Her work evolved from a stage of “representation” of the myth during her years as an art student, to a later mature artistic moment in which the myth served as a vehicle for the post-modern travesty which characterized young Cuban artists in the 1990’s, after the collapse of European socialism. Belkis’s monumental collographs were pioneer in the country and worldwide, and provided the Abakuá legend with an overpowering iconography it did not have previously. Behind the Veil of a Myth is an approach that interconnects the artist to the Cuban and international context, and to the unmistakable signals of the present and the universality that her work communicates from its deep social and liberating vocation.