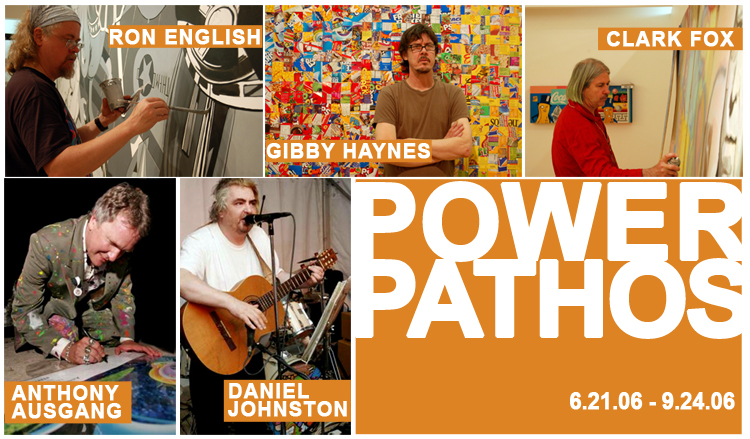 The will to power not a being, not a becoming, but a pathos – the most elemental fact from which a becoming and effecting first emerge.
– Nietzsche

POWER PATHOS is an exhibition of the work of five artists, Ron English, Clark Fox, Gibby Haynes, Daniel Johnston and Anthony Ausgang, who have deep Texas roots. As an exhibition it is a contribution to a contemporary art movement that is rapidly becoming the mainstream for a growing number of young artists who are responding to the blitzkrieg of mass culture on their lives.

Originating in the early 1990s (the end of the Cold War and the true beginning of the 21st century) this movement has appeared in several guises: Lowbrow/Pop Surrealism, Acid Pop, Massurealism, and Nobrow. To our mind, Pop Surrealism is the most apt. It identifies this new approach as the leading edge of a continuum from historical Surrealism to the present.

Pop Surrealism is working class, anarchist, and populist; at the same time, it communicates a radical post-Freudian, confessional psychology. Its references and subject matter – comics, graffiti art, outsider art, billboards, car art, rock music, street culture, pop stars and pop presidents – may converge in the work of each artist, but this convergence gives way to an outrageous sense of independence. The central focus is on transforming popular cultural, political, commercial images and personal experience into subversive, psychologically intense expressions of the human psyche. Pop Surrealism attests to the power of weltschmertz, an amalgam of sorrow, pain, rage, and dark or black humor.

Either reinventing, modifying, or stealing popular material outright to suit their social, political or aesthetic purposes or creating new images, the artists’ objective is not only to free themselves and their viewers from the delimiting and stultifying effects of religious, commercial and political propaganda but also to rescue the imagination itself from its evident decline in American life.

Power Pathos is an affirmation of Pop Surrealism. It is one of the few museum exhibitions to recognize its importance as a 21st century movement. In an era of widespread disinformation, social and spiritual unrest, the five artists in the exhibit can be seen as the modern archetypes of the eternally independent spirit. Other artists, such as, Robert Williams, Mark Ryden, Camile Rose Garcia, Sas Christian, Lori Early, and Todd Shorr have made significant contributions to the movement but as yet have received little museum recognition. Like the artists in Power Pathos, they probe the relationship between consumerism and its pathological effect on contemporary consciousness.

The curators of the exhibit are Alan Schnitger, Jordan Poole, and Clark Fox who helped organize the exhibition from its inception.